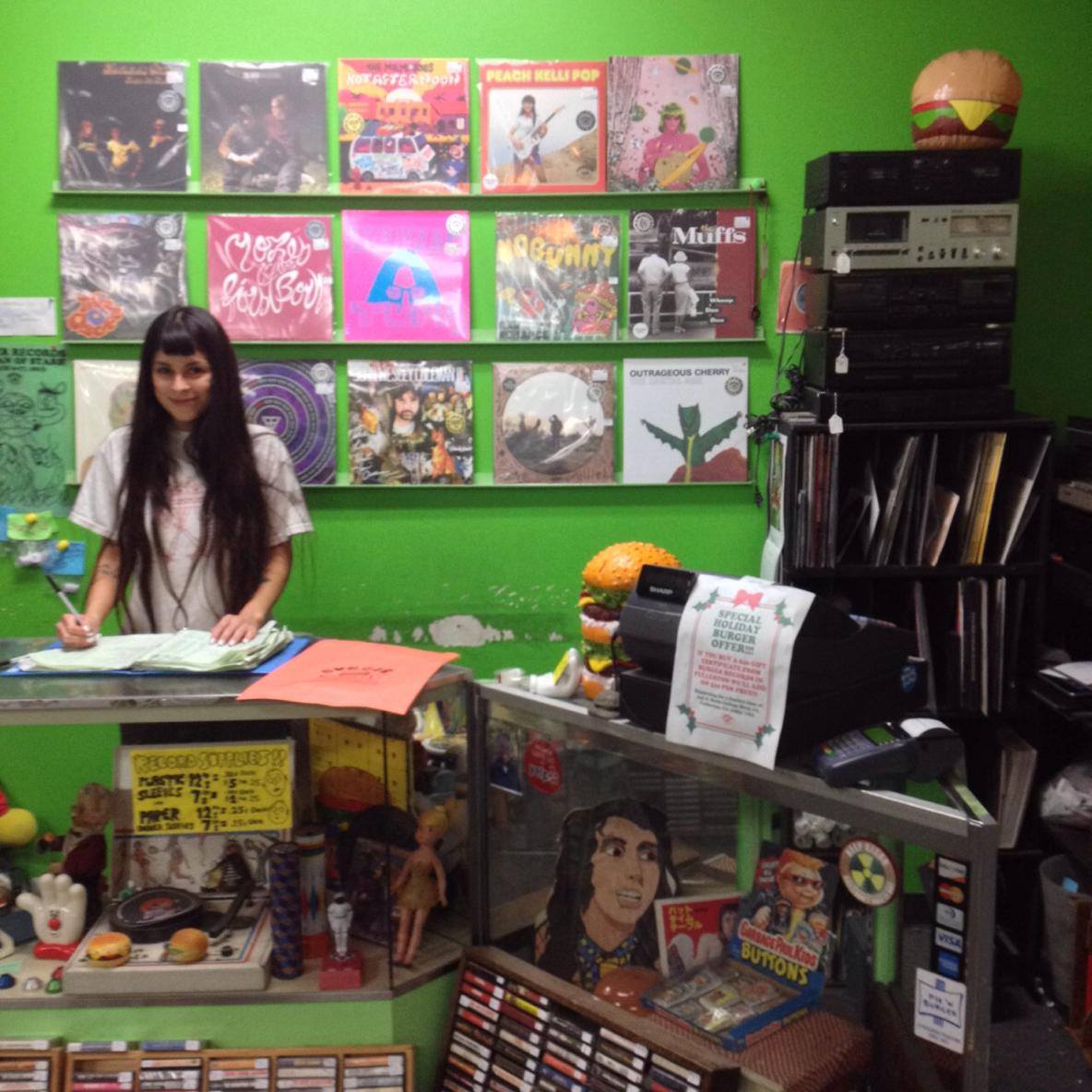 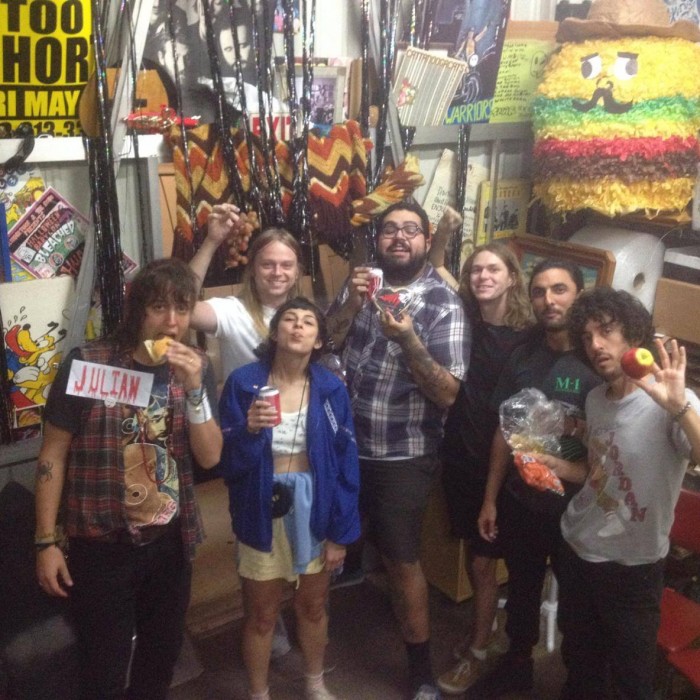 In recent years, Sean Bohrman, and Lee Rickard from Fullerton, California have been revolutionizing the record industry whilst disregarding the rules of the status quo along the way; in the meantime providing a boost to bands, their hometown, Fullerton, musical nerds, and the cassette tape industry through their refreshing label, Burger Records.

“We love music, we’re passionate, and we want to turn people onto that,” Sean says about starting the label. “That’s the fun stuff: creating an environment where people can have a good time and make something happen. That’s what we strive to do and that’s what we live for.”

The duo have even been prophetically endorsed by the Iconic, Iggy Pop and coming from a guy, as wise and revolutionary we must take heed.

‘There’s a wonderful company called, ‘Burger Records in Fullerton. It’s a couple of nuts who sleep in a strip-mall storefront and they make great records. Great, great records by people like Cherry Glazerr or The Go.’

Bohrman and Rickard struck upon the DIY idea of creating their own label whilst searching for a record contract. The label, which began as a way to release records for their band ‘Thee Makeout Party’ and their friends’ bands, ‘Audacity’, for instance has spectacularly morphed into one of the more prolific purveyors of cassettes tapes on the planet and being at the forefront in the reawakening of cassette culture.

‘The visionary decision behind distributing albums through cassette came according to Bohrmann after getting hold of a cassette by the band ‘AM’ while on tour, which impressed him by the quality of sound and packaging. He decided to try cassettes as a practical way to release music and from there ‘it turned into something we never expected!

‘‘All these distribution companies that didn’t carry cassettes (circa 2007) now carry them and all these other labels that didn’t do cassettes way back when because they had no interest in it are doing cassettes themselves now. I think everyone has caught on now!’

At some point they began putting the Burger logo, which Rickard had drawn while bored at work, on all their artistic endeavours.

‘The Burger is in itself an American Landmark. When people see a Burger they think of America, right?’

The label has released hundreds of «first albums», thus being one of the great pioneers in the world. All of that could make your head spin. And yet, what characterizes the spirit of Burger Records the most is the ‘chill’ and ‘coolness’ in attitude yet extreme enthusiasm for music.

Recent success has not fazed or distracted Bohrman and Rickard whom both remain focused, and further addicted to the cause; both attain residence at the labels record shop base and maintain belligerent working hours from 11am to 4am.

‘Being able to help bands, and be a part of music in a big way is really awesome. To build our legacy, to have burger be remembered fondly after we are dead and gone, is, I could not ask for anything more!’ ‘Cause music is so important.  It can change feelings and it’s just a really magical thing. It means a lot to us that people are listening and getting something out of it; it’s more than we could have ever asked for.”

Philanthropy is another integral aspect of the label, notably Katenge Mduduzi Mufuzi from Zambia whom is a child through ‘Children International’ they came into contact. The label sponsor him with dollars collected from the band, nobunny’s raw romance cassette, which proved a spectacular success.

‘It was our first big hit, we sold 500 tapes in a week and a half and we charged an extra dollar for each tape and that went to Katenge and his family. We were able to increase his family’s income 50 percent for two years with just a week and a half of selling a cassette. Since then we’ve continued to sponsor him and so we’ve seen him grow up the past seven years and we continue to get pictures.’

Bohrman and Rickard have stepped up their entrepreneurial artistry to radio through, ‘Burger Radio’ and even a YouTube channel called, Burger TV. The channel documents what’s going on with the Burger crew, live shows, music videos, and other general amusing escapades.

“WE HAD REAL MTV. NO ONE HAS ANYTHING

Like many of the labels endeavours, BRGRTV seems to have happened organically and with approximately 109 episodes to date may I suggest that you take a rest from Netflix for a while- if cool music and vibes is your thing, you will not be disappointed!

“It just came from me and Lee getting stoned together and talking about random stuff and within a week and a half we had the first episode with the theme song.  It all came together really really quickly.  Since that episode we haven’t missed a week.”

Venturing further afield and expanding the burger vibe evermore the label is also organizing dream like festivals, such as Burgerama! and the pioneering project of the all-girl group festival, BURGER A GO GO, in addition to practically taking over SXSW this past year.

Concluding the interview, I rounded up some quick fire questions for Sean to answer. 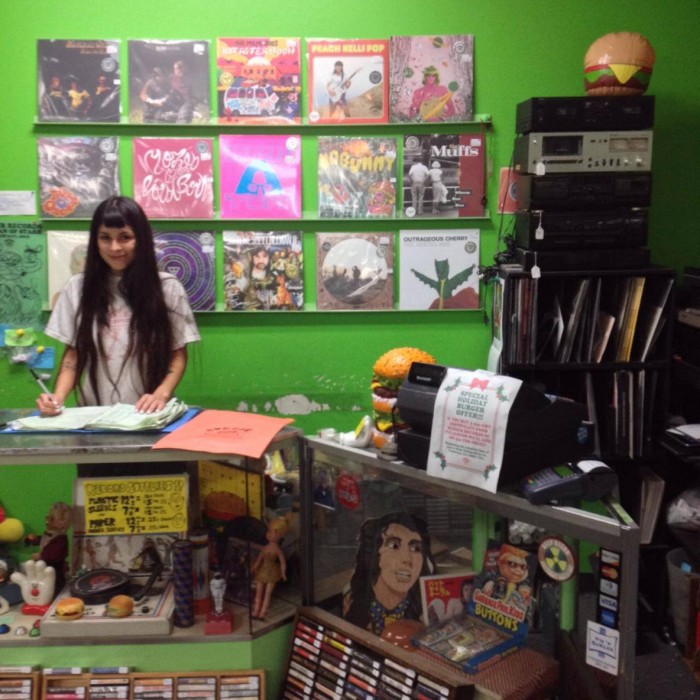 When you started Burger records as a label did you have any model of how to operate, or did you just try to take care of business and put out music you liked and hope for the best?

We didn’t have a model, just a love for rock n roll and a respect for it’s history 🙂

What is the state of the independent scene – how have things changed since burger began?

Biggest thing that’s changed is that bands are making more money and more kids are listening. When we were in Thee Makeout Party! We were playing multiple times a week to nobody and not making any money.

Who was the first band or artist on Burger from outside California or even America?

How do you feel personally about digital music?

Do you think the convenience of hearing music and being able to immediately own it is a good thing?

Yeah, but with digital files it’s not really owning – I think you only really «own» something if it’s physical and you gotta wait for that.

I adore your twitter feeds! What’s the inspiration and idea behind them?

What aspirations do u have for the label?

Hopefully, for the label to allow us to live free and easy.

Do u give full creative rights to the artists or is there a 50/50 compromise?

Why do you think tapes are becoming more popular again in 2015?

I think part of it is us continuing to make cassettes. When we started, there were people saying, ‘Why are you making cassettes? This is the stupidest thing I’ve ever heard,’ and we just kept making more and more. We still get those people, but we believe in listening to music by any means necessary.

What is your proudest moment to date,since opening the label?

Proudest moment is being recognized and appreciated by Iggy Pop.