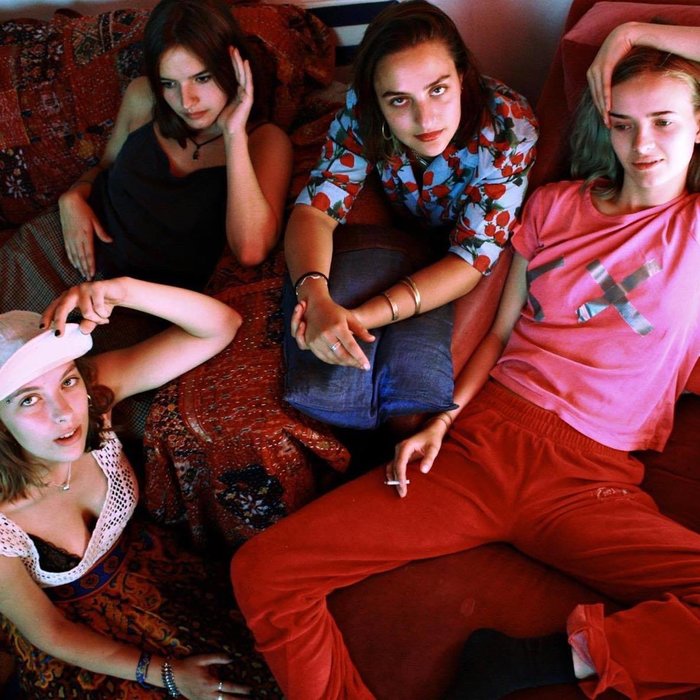 ‘It’s a beautiful world we live in, a great fantastic place beautiful people everywhere, and the way they comb their hair’. Such idyllic inspiration, caught me off guard by a band, whose uncensored lyrics like, “I’m disgusted, I’m ashamed of this so-called human race”, deliver like a sermon with unrivalled criticism, in the music industry of the world at our finger tips. 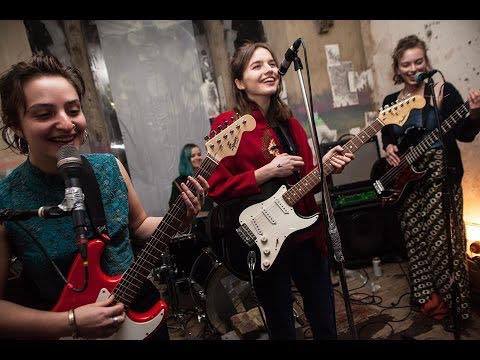 They explain that the lyrics were written ‘when we directed our personal grievances onto the exterior world and blamed it for our troubles’, yet the band maintain an abundance of clarity in thought and lyrical perspicuity, which will positively inspire all who will listen.

‘the ONLY important thing about music is how it makes you feel, that is it.’

Goat girl are a curious and intensely intelligent bunch of ladies creating humorous, and literate, scathingly satirical lyrics on society and politics, alongside discordant, repetitive sounds. The vocals are so soothing to the ear, like honey is to a harsh ill torn throat.

‘So three of us have all been making music since we were quite you then we did it together and that was that.’

It is no surprise that their name is inspired by Genius comedian, Bill Hicks sketch, ‘Goat Boy’. They are what many torpid journalists would describe as a buzz band, with the Guardian leading the way, proclaiming their influence in ‘rebuilding the London indie scene’

‘Thanks to their guttural guitar music, the fun-loving foursome are leading a new wave of bands with no time for the blokeish arrogance of yore’ – Guardian

With an extensive history laden with a ‘good ear’ for artists, such as, ‘The Strokes’, ‘Pere Ubu’, ‘Cabaret Voltaire’ and recent heroes, ‘Parquet Courts’, Rough trade Records have acted quick and smartly seized their signatures.

‘by some miracle rough trade got in contact, we went with them because they are sweet people and made us feel looked after.’

Following studio time with the fast rising, undeniably talented, Margo Broom, the band released their debut double A side singles, ‘Country Sleaze’ and ‘Scum’ in October.

‘We loved working with Margo she helped us out loads at the beginning..’

‘Sleaze’ is a gritty track built with a sludgy bass line, jangling guitar with penetrating, pure unchecked lyrics, “I’m disgusted, I’m ashamed of this so-called human race” whilst ‘Scum’ offers similar vibes with acerbic criticism of the current UK society: “How can an entire nation be so fucking thick?”

‘Good question, it is just a word play on our favorite band the ‘Country Teasers’……

Distributed in October with striking success, the band have released duel complimentary videos, with ‘Sleaze’ directed by Douglas Hart (one of Jesus & Mary Chain’s founding members) one being an hilarious depiction of modern society, with a prevalent political underbelly, featuring friends being spoon fed like babies, alongside an actual ‘factory baby’!

‘Well the concept behind it was something slightly political I guess about being spoon fed like BABIES!’

Following extensive tours with Parquet Courts, and The Lemon Twigs, I managed a yarn with the band about their origins, inspirations, Journalistic misquotes, as well as, Yule tide plans. 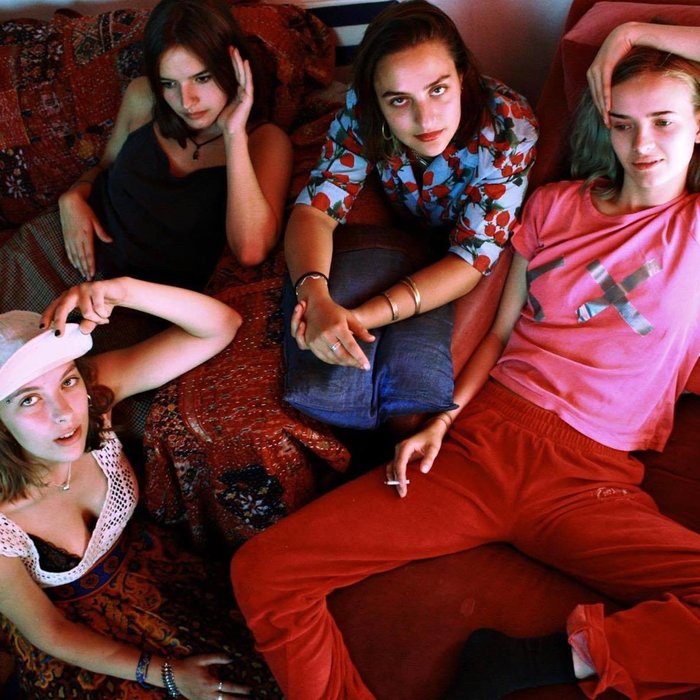 How did Goat girl originate and any explanation/concept behind the name?

So Three of us have all been making music since we were quite you then we did it together and that was that. the name comes from bill hicks sketch ‘goat boy’ then we changed it to girl because… we’re girls.

“I’m disgusted, I’m ashamed of this so-called human race”. What disgusts and shames you most about the human race?

Nothing, the human race is great we wrote that when we were young and angry and had nothing better to say so we directed our personal grievances onto the exterior world and blamed it for our troubles. Most humans are actually very decent.

What is a ‘Country sleaze’ for our Latin/international readers?

That is a good question, it is just a word play on our favourite band the ‘Country Teasers’ its about Lottie (singer) wanting to find him and kiss him.

Your videos are wonderful and for ‘SCUM’ you invited anybody to be an extra. Could you describe the concepts behind them?

Well the concept behind it was something slightly political, I guess about being spoon fed like BABIES! that is why there is a baby, its a rental baby they have big warehouses full of them just waiting to be used in music videos pretty bizarre. we invited all our friends to be in it many of them in bands themselves we’re very grateful of them taking part yay. 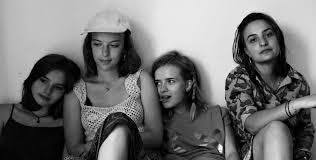 You signed to Rough Trade in September. Why Rough trade and how did it all happen?

I could not even explain the process it was strange we got out of school then it was BANG rehearse loads (we’d actually given up on the band the previous summer) when we got our lovely manager milo ross and he thanks heavens pushed us till we could actually play our instruments a little bit then by some miracle rough trade got in contact, we went with them because they are sweet people and made us feel looked after but the music business is still a business is not it so we need to stay on our toes although that can be hard when you just want to lie down all the time!

Why did you release a double side single immediately after signing without an album?

Apparently that is the way it goes, I have no idea sorry.

Why did you choose to work with Margo Broom, as producer, and how was the experience in the studio with her?

Well, we started working with her as our friends in Milk Disco (another south London band) suggested that we start rehearsing in her studio as it was cheap and we could use all of her gear which was great. I loved working with Margo she helped us out loads at the beginning she Dj’d at our gigs etc etc and recorded so many of our songs it was stress free rehearsing and recording there but that eventually lead us to becoming lazy which we all are and buying a plastic ball and playing with that in the front yard instead of actually making music… bad mistake on our part but hey ho. 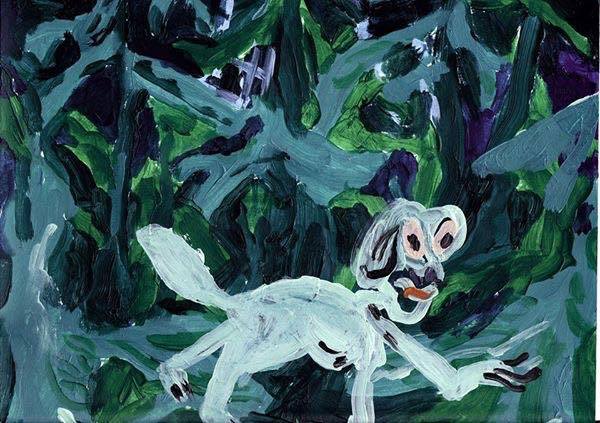 The Guardian proclaimed, you as contributors in the rebuild of London’s indie scene, yet you disclaim this high praise. What are the reasons then, which are contributing to this rebuild?

I think we all agree that what most journalists write (no offence I am sure you do not do this) especially in what are considered trendy or cool or intellectual left wing magazines like the guardian etc. jut spew out anything they can to make what they are writing about seem interesting to people who have not a clue what they are reading about just as little as the writers themselves. so stupid remarks such as ‘rebuilding an indie scene’ is nonsense, styles of music come and go there is always been bands and there always will be, we’re not ‘doing’ anything extraordinary and we never set out with any intentions of rebuilding a scene or changing culture bla bla bla because all you need to do is pick up an NME from lets say two years ago or a year ago and they were saying the exact same things about bands in London then but time proves that people get bored, move on (due to our short attention spans THANK YOU FACEBOOK!) and forget about these things, nothing is important in that respect the ONLY important thing about music is how it makes you feel, that is it.

I read a quote from (vocalist) Lottie, “People help each other out. There are no promoters, we put shows on for free,” I dabble in promoting, myself. Do you feel the role of a band promoter on any level is still relevant?

YES, the man who wrote that article made that quote up… Tim Perry the promoter at the windmill has played an enormous role in our journey we love him and we love playing there. Promoters are great so long as they genuinely love and care about the bands they are promoting.

“Being in a band, it’s like… well old, it’s been done for fucking ages. I think it’s not cool now.” Is this the exact reason why you began a band?

Again another false quotation, when Ellie said that there was a lot more of a context to what she was saying. I do not know why we started a band but it is true it has been done relentlessly for decades now and that is fine but it can be boring too.

Whom and what inspires you to create or be who you are?

ITS A BEAUTIFUL WORLD WE LIVE IN a great fantastic place beautiful people everywhere… the way they comb their hair. its a physical world for you.

Is there really a scene around you, HMTLD, and Fish with ‘So young magazine’ detailing much of your movements in and around South London, or is this just media fairy tale?

Its not media fairy tale, there is a group of bands we’re sort of like the second generation to bands like the fat white family, warmduscher and meatraffle etc. we’re all around 19, 20, or so and we’re all friends, we met through watching bands like I mentioned before at the windmill then we formed bands and it went from there. the media are sort of right but they hype it up, its great fun hanging out and playing music but we not fucking shifting anything.

Do you consider yourselves feminists in this day and age?

What do you buy each other for Christmas?

Nothing we’re all too tight on money, what fun!

The biggest misinterpretation of the band?

That we’re fun loving, that we care 🙂 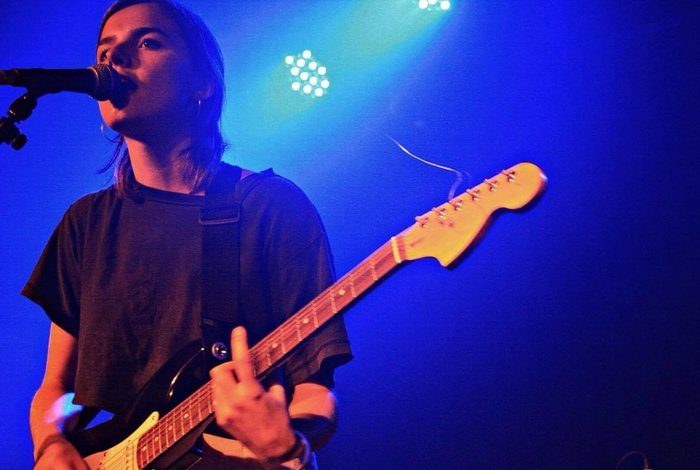