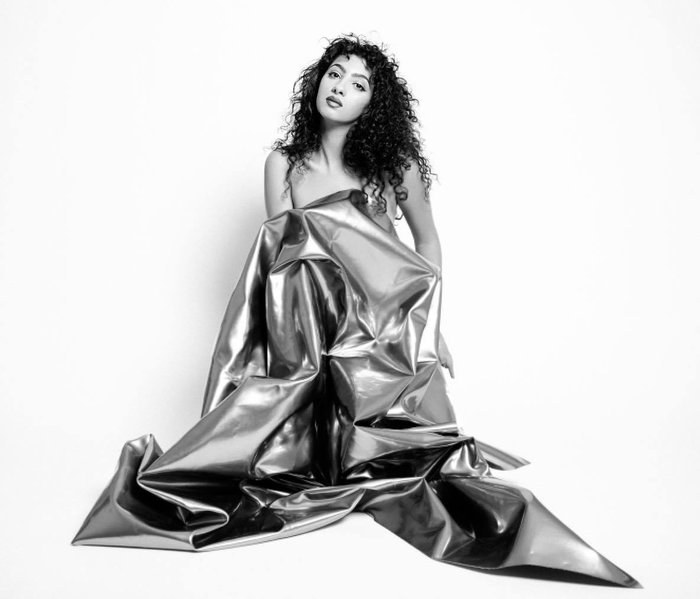 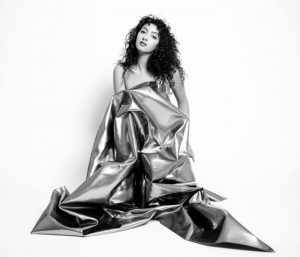 Sadaf focuses her art upon all aspects of the body. The body and it’s supposed limits. I first came across Sadaf through my daily filtering of YouTube discovering her stark, and striking performance at the EndeTymes festival of Art and noise. Information regarding Sadaf’s art is rare and I am still somewhat a student of her art, which is highlighted by being corrected by Sadaf during the interview.

‘I think to live a passionate life is to be prepared for both extremes of joy and pain. Unfortunately, the experiences that bring us to these states, we do not have control over.’

Born in Iran, but raised in Canada before moving to New York, Sadaf’s background is in visual art. But it’s as a singer and DJ in New York’s once more effervescent nightlife scene that she’s forced an impact.

Whether she’s DJing deep dancehall cuts at the Guggenheim gala pre-party or yelping into a microphone tangled in industrial chains at a Chinatown art gallery, her work is rooted in experimentation and improvisation. “Because things aren’t really planned out, hidden desires and recurring themes come out,” she explains

Her art is of the underbelly forcefully inspiring the independent music scene gradually filtering through to mainstream audiences, if not ten years too late. She has also played alongside guitarist Arto Lindsay, of legendary no wave band DNA, a major influence on Sadaf alongside the unfiltered outpourings of outsider musicians like Daniel Johnston and Wesley Willis.

‘I have to be able to record whenever I want, so scheduled sessions at a studio rarely give me what I want’

Sadly, No Wave doesn’t exist anymore except in spirit and I expect that she would rather be part of a ‘movement that hasn’t been named yet’. Her goal is to ‘expand and break genres that already exist’, which less we forget is an attitude that No Wave and any counterculture movement fosters to begin with.

Dazzling in her complexity, maddening in her mystery, she is not an artist to be under estimated. I caught up with Sadaf to eagerly understand moreupon the human behind the baking hot music, how it all began and what she is currently cooking up in her Chinatown studio. 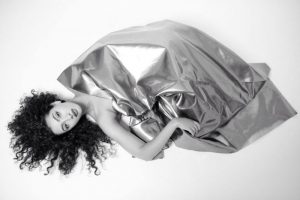 Tell me about the artist, Sadaf for those who don’t know?

I’m actually not quite sure myself. I work quite intuitively, and from the inside out so i feel like perhaps others have a clearer vision of what it is that i do. I do not have this necessary distance from it myself. Hopefully i will be able to look back in a couple of years and be able to unpack my work a little bit better.

How did you become a musician?

Accidentally. I think it’s because I don’t value craft so much. To me anyone can be a musician, anyone can omit sound. I grew up playing violin, I played classically for nine years. It was a dread to practice, to go to classes. I hated it, until I was able to improvise and develop my own way of playing. It was like reclaiming the instrument for myself.

I think in our current world, happiness is a compulsion, I’m not so interested in happiness, as an absolute goal. I think it is beautiful to achieve a certain kind of peace with oneself and with others, but a lot of times being blindsided and happy go hand in hand. i am more interested in a kind of joy that results from reflection. . My biggest fear is to have such a compulsion towards happiness that I lose criticality, where relationships become satisfactory and replaceable, where life is over simplified and lived without questioning. I think it is important to accept the darker side of life. I think to live a passionate life is to be prepared for both extremes of joy and pain. Unfortunately, the experiences that bring us to these states, we do not have control over.

I’m naturally very drawn to chaos, and not necessarily by choice. It is just what comes out musically, performatively. For me chaos is a form of complexity. I don’t want to lie, I want to be as honest as I can, and that means including whatever needs to be included no matter what the result. I would say that i am a maximalist in that way.

Do you feel you are part of a ‘No wave renaissance, being described by I-D. Vice, as New York new no wave star?

Haha, I don’t know about that. No Wave doesn’t really exist anymore. It’s what I listened to a lot as a young teenager, and it did influence my work a lot, but I would rather be part of a movement that hasn’t been named yet. The goal is to expand and break genres that already exist, which is an attitude that No Wave and any counterculture movement fosters to begin with, and i am all for that attitude to resurface.

When I’m at my most confident. When I have a bit of distance and resolve from the situations that drive me to create something in the first place. When I have digested a little bit. The worst moment is when I feel off balance or panic-ed or traumatized, because I am not able to be as complex as I want. I start to gravitate towards very simplistic almost television type themes, cheesy themes, because I feel too off center to be funny or see the bigger picture. That’s why I think the mainstream deals with such broad regurgitated cliché terms, because it is easier to accept these themes without the complexities that they actually offer in real life. At the same time, my favorite quote from Fassbinder is “And I don’t believe that melodramatic feelings are laughable – they should be taken absolutely seriously.” I really agree with that, Melodrama is not funny, and it is not possible to understand Melodrama with distance. I would like to place myself in the middle of all that , somewhere between trauma and resolve.

What is inspiring you right now?

The only thing that is consistently inspiring to me and has been since I was 14 is a certain kind of film. The kind of film that has the potential to offer you a window into how others see or experience the world, a worldview, a personal perspective that can have a universal appeal. Right now, i am really into the films of Lithuanian film maker, Sharanus Bartas.

Does performance art offer you the same outlet being a singer, or front man of a band?

I’ve never been a front man of a band I don’t think. There isn’t that much difference between when I perform live music and when I do a performance at a gallery. It is all quite connected, as it is coming directly from me. This being said, I would like to start working more with others, introducing new characters in my performances, casting actors and creating more of an expanded storyline.

Your collaborative performance and installation at 47 Canal gallery with Joe Heffernan explored body movement and constraint, sheet metal and chain. What inspired such a focus of the body, which is a notable theme in your work?

It’s always been about the body for me. The body and it’s limits. And since I’ve been doing performance, it never departs very far from the body and an element of constraint. I’m quite moved by the body, the body as a vessel, the body as a shell, the body that decays with time and sometimes doesn’t correspond to the desires of the mind, the body that we don’t always have control over. The body itself is a constraint to the mind a lot of times. I’m interested in the ways that the mind tries to escape or get out of it’s body. Music can be one attempt towards this, eroticism another… 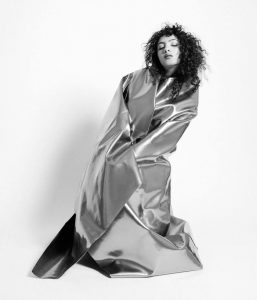 What is your recording process and is there anything particular about it?

I record music in my bedroom most of the time. I have to have an intimate relationship with my work, I have to be able to record whenever I want, so scheduled sessions at a studio rarely give me what I want. And I don’t like to record with others around. I am quite shy, haha.

It isn’t featuring any of those artists. The track is not sampling anyone else, it is entirely performed by me. I think it speaks to a tradition of female vocal technique/singing style that could make someone draw that line of comparison. So in the article you are talking about, I think what is meant is that I must have been influenced by those artists…and I do relate to both, Diamanda Galas especially is a true inspiration. That being said, I think I relate more directly to Persian traditional singers in a way, I think this is what I am channeling in my improvisations, which is a sound that creeps in perhaps from an unconscious ancestral tie to middle eastern laments.

You are also a DJ. Could you tell me what you enjoy about this creative outlet and how you came to making mixes?

It happened very organically, I started to DJ at bars where friends worked, sometimes there would be like five people there. It progressed to playing much bigger parties. DJing is a pleasure for me. I see DJ-ing as a form of gift giving through sharing discoveries with others. It is such a high to see people dance, and of course out of these songs, it is possible to curate a very unique experience, like a new way to tell a story.

‘I definitely need the two extremes to balance each other out, and even though I have a lot going on there are days where I need to turn my brain off’ I am exactly the same as this. Could you offer any insight as to why contrast seem to happen? However, ‘watching three or four films in one day’ is someone’s idea of getting a lot done!

I think I get burnt out. I give what I can give, and then there is nothing else to give until I’ve locked myself in my room for several days glued to my bed, glued to the screen, literally wasting time. It is true that watching four films a day can be an accomplishment and I really do take a lot away with it, but at the end of the day the viewer is passive. Ultimately, I think this just gives time to digest and sort through ideas, and then when I have allowed my brain to rest, it’s easier to make something.

If you were to play one last record of yours, or any song as a DJ, which would you choose and why?

That’s a very hard question, and not one I can answer honestly, because I just don’t know.There are too many songs that I love. A song that I love and has an immense amount of sentimental value for me is Sami Smith’s Saunders Ferry Lane. I love that song, probably a surprising choice, but I actually really have an affinity towards sad country music. That being said, these days i am listening to a lot of Chet Baker. In fact i am only listening to Chet Baker, haha… these phases come and go, i guess. 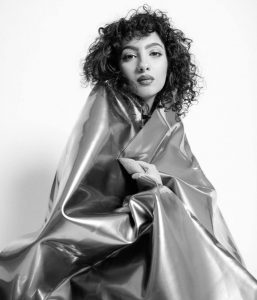