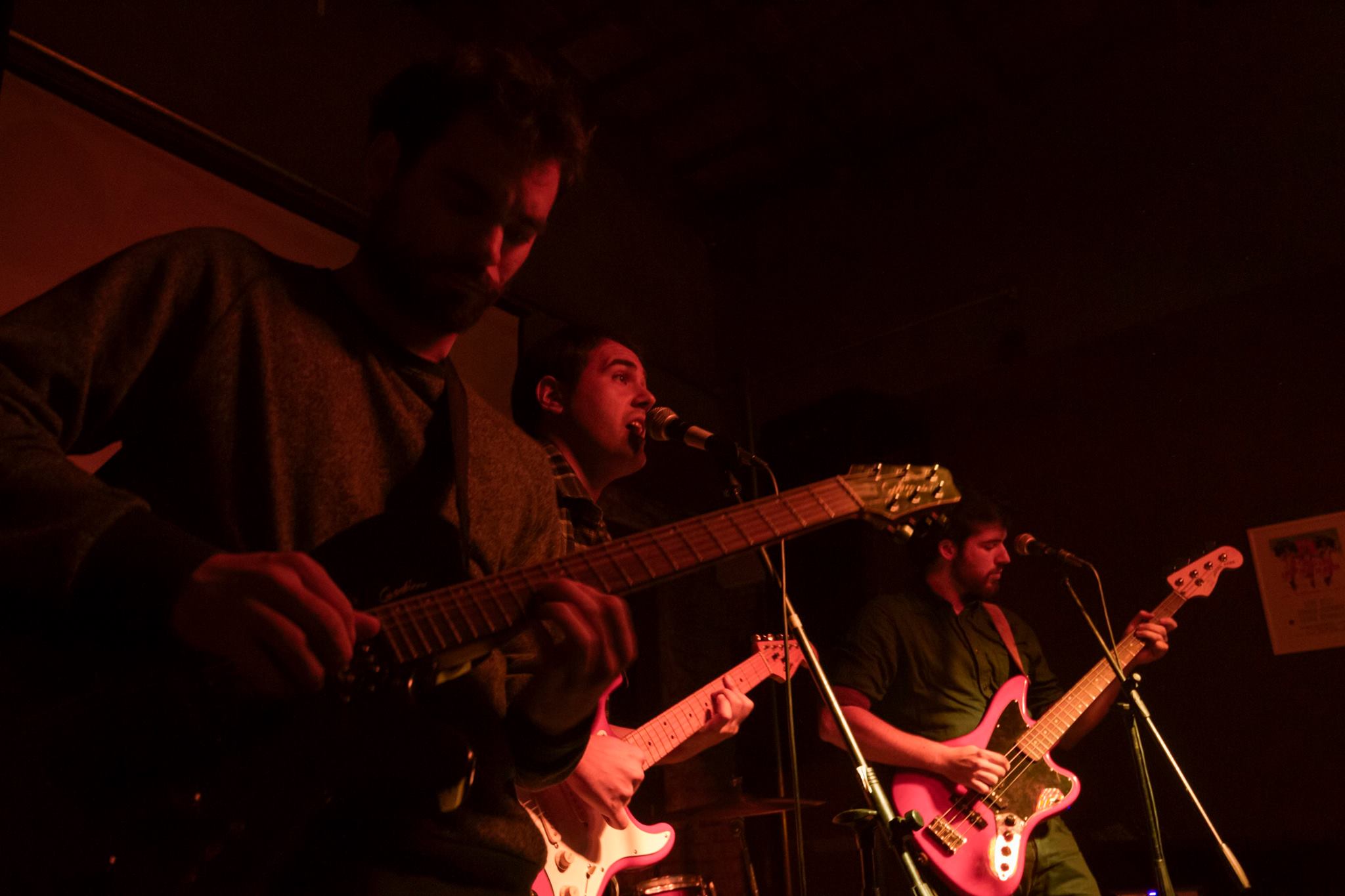 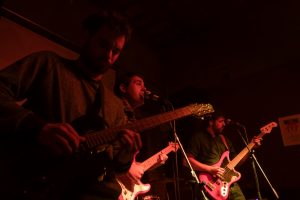 For the majority of us, the purpose of life has always been somehow being famous, being known and respected by our peers. From times pre- Aristotle, that has been a main ignition of worry in human existence. The concept of ‘Ignominia’ is the opposite of that, however. It is exciting on the outside yet dark within its core meaning to be unknown, to live and die ignominiously, forgotten in an empty space.

»I think it is very difficult to make rock music in Uruguay. Everything is hard, they don`t pay the bands at almost any venue!»

I unconsciously adopted ‘Ignominia’ around the age of twenty-one. I suspect that it was more a morally dysfunctional quest for adventure, and freedom fueled by youth rather than anything drastically negative. After my stubbornness sank, I soon realized that it is a rather negative method to exist positively, in such a cool world. indeed, society and the world has evolved, plus you need to love something other than your own hatred.

The universe spoke and Patricio of the band ‘Delouners’ contacted me, enabling me to discover a raw and groovy  band bashing out poignant anthems. The band had already released two exciting EP’s, ‘Ignominia’ and ‘Family’ so i had some homework to do. 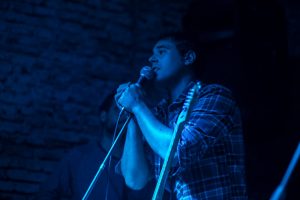 ‘Delouners’ is how ‘The Loners’ would sound in Spanish and comprise of Patricio, Pablo, Rodman and Mateo. These four young guys around twenty-five and twenty-six year old with their sexy names are winning in their creative field, yet losing in making themselves heard.

Presuming the band were ripping it up in, Uruguay, I was rolling my eyes when they explained to me the difficulties in creating alternative music in their homeland. ‘Everything is hard, they don`t pay the bands at almost any venue, unless you are big local band or have been around for more than 15 years or so’.

»We love people and we consider ourselves very fortunate because we enjoy almost every form of human culture.»

‘There is a lot of underground independent rock bands in the country’. So, on one hand, the country is an awesome scenario of influence and musical evolution, but on the other hand it makes it ‘super difficult to be heard due to the little space for new young bands that media have’. 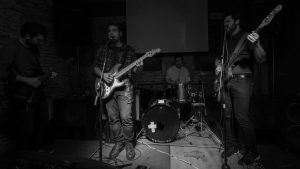 I caught up with the guys to talk more about their origin, influences, Uruguayan literary heroes and why they should be being gaining more buzz across the globe.

How is life as musicians in Uruguay?

I think it is very difficult to make rock music in Uruguay. Everything is hard, they don`t pay the bands at almost any venue, unless you are big local band or have been around for more than 15 years or so. There are a lot of underground independent rock bands in the country. So, on one hand, that is an awesome scenario of influence and musical evolution, but on the other hand it makes it super difficult to be heard due to the little space for new young bands that media have.

Our new guitarist Rodman teaches music in high school, and he also plays for the national folk band, so he gets to travel around with music. As for the others, we have regular jobs, Pablo the bassist and I are journalists, and Mateo, the new drummer, is a graphic designer.

The ‘Little tiger’ video is awesome. Could you tell me about the videos concept, plus the director?

Thank you! Delouners`s bass player Pablo Stariccco and I met very talented people at the University in Montevideo, like directors Juan Cohen, Matt Benvenuto and Juango. Back in October 2015 when our first album came out they went to our gigs and told us that they wanted to make a video for that song. They wanted to film Montevideo with an unusual point of view, showing tired people finishing their days. I guess what you can see in the Little Tiger video is the rhythm of the city and a close look of the people.

Tell me about the name, Delouners?

Delouners is how the words “the loners” would sound in Spanish. Written like that, for us, it sounds interesting, and there aren’t bands with that name. Plus, there is something French or classy about the word that we love. We made the name up in the endings of 2012, at the little apartment where I used to live in a neighbourhood called Parque Batlle, where we used to get together to jam and drink Jaggermeister.

What do you enjoy most about being in a band?

The fact of writing songs, rehearsing, then recording and playing live. And also, mostly, the fact of hanging out with my friends.

Why should people listen to your art?

Because we make honest rock and roll in a place where it is still hard to make rock music.

Is there a need for record labels in the modern age?

I think so. We have never had any, but we should. Labels often help with Press releases, making gigs for their bands and making some little money for the musicians. And especially in this place, we lack labels for young artists.

When are you at your most creative?

When I play the guitar. Our songs usually come from there, if some chords and melodies sound good to me I record them, and then the rest of the Delouners do their part. Our formula has been pretty simple so far.

Whom are the bands inspirations?

We have very different musical backgrounds, but I would say The Beatles, The Dandy Warhols and the Argentinian band Los Espíritus, among others. As for me, right now I am listening to an awesome Italian dude called Calcutta, and last week I discovered a Brazilian girl called Mallu Magalhaes that hypnotized me.

How do you decide upon what songs make the cut or not?

Every album or EP must follow some type of concept or criteria. That doesn’t mean that all songs must sound the same or be similar at all. For instance, in our new EP, ‘Ignominia’ we left behind two songs that were more stoner-rock-like and included “Siento”, that is a mixture of pop-rock and a psych English-Spanish story and it fits better with the other songs. Our producer recommended us to include it on Ignominia and we recorded it by the end.

Do you find social media an overall positive for the band?

Absolutely. I think social media today is mostly everything in the language we use.

If you had to select one song for our readers to check out what would you recommend? via, your work or the world?

-I was always struck by Seaside, from our album Family. (https://www.youtube.com/watch?v=LMdAnCNtGaI). Is the only song of Delouners where I don`t participate, and it also the only one that has no real drums. We wrote it on the summer of 2014 in a small sea village called Cabo Polonio in eastern Uruguay, where there is no electricity and the sky is huge. (did you get to spend the night there?)

-I would select this new Brazilian song I discovered two days ago: https://www.youtube.com/watch?v=hrh6zd5c0OY

Tell me about the ‘whole different sound’ between ‘Ignominia’ and your album ‘Family’?

In Ignominia we wanted to escape from the vintage rock sound we have always had. So this time we chose a more clear music aesthetics, it is not necessarily a mainstream sound, but it is a product that was recorded with actual gear. For our next record we haven’t decided yet what we will do, if it is going to be an analog recording like Family, or more like this new Ignominia EP we released two weeks ago. I think we may continue the line of the EP.

Tell me about your writing process, and life in the studio?

Last year Santiago (guitars, vocals) and Diego (drums) left the band and our friends Rodman (guitars) and Mateo (bass) joined in. I used to be 2nd guitars for the Family album, and didn’t sing and write in every song. Now with Rodman playing by my side I have the composer and lead guitar role, which fits me better for Delouners because I feel more comfortable playing in this position for the music we make. I don’t consider myself a virtuous guitarist, and leaving that responsibility to Rodman makes it easier for me to focus on the singing and writing only and I don’t have to worry so much on the arrangements of the guitars.

Ignominia was recorded on Blastoff Records, or friend Mateo Flores Benedetti`s home studio. He is a very professional guy and the EP was recorded pretty fast, in a period of 4 weeks.

How do guys relate to humanity?

We love people and we consider ourselves very fortunate because we enjoy almost every form of human culture. We are around 25 and 26 years old and we are having a real great time in our lives, and being alive and doing what we like is great for us. The life ethics in Uruguay tends to be more focused on pursuing personal pleasures and not worrying too much about making money. That is not bad, nor good. But it shapes the way we exist.

Are you guys fans of the (Uruguayan) Poet/Author, Mario Benedetti ?

Of course, we know Benedetti, but we are not precisely fans of him. I have heard from relatives that are big fans of him that his stories are far, far better than his poetry. Benedetti performed in one of my favorite movies, The Dark Side of The Heart (1992), a Canadian-Argentinian cult film, where he appears in a bar in Montevideo telling poems in German language that are amazing.

Can you tell me what is in store for the reminder of 2017?

We will play in July in our hometown Canelones, and probably will play in Montevideo that month as well. After that, Rodman will play in France and Spain with his Uruguayan folk group on a 45 days tour, so we will have more time to focus only on writing new songs we have. At his return, we would love to play in Buenos Aires, but there is nothing certain about it, though is relatively easy to do so.

its not in the document but if you could tell me why you chose to record your album, family on an old tape recorder, and the differences between that record to ‘Ignominia’ and the meaning behind ‘Ignominia’, is it like disgrace in english?

We thought that the sound of that old tape recorder fitted the songs perfectly. Especially for the drums, I think that the drums in Family have an original and unique sound. We thought it would be cool and adequate to use it.

Family is a more profound work, it is a bit dark and you may have to listen to it a couple of times before your ears get used to what is communicated by the music. After that, you get used to it and you begin to enjoy the songs more. On the other hand, Ignominia is a more pleasant work, it can be consumed faster and under a more conventional musical code that we all use when we listen to music.

The concept Ignominia means the opposite of being famous. For humans, the purpose of life has always been somehow being famous, being known and respected by the others. From times even before Aristotle, that has been one of the main worries in human existence. The concept of Ignominia is the opposite of that, it means to be unknown, to live and die ignominiously, forgotten in an empty space.