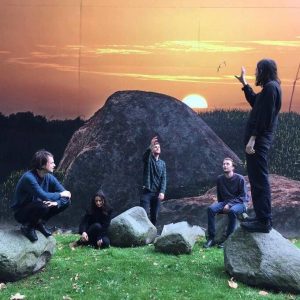 ‘We are ALL humans. We learn from humans and animals and trees and everything else. Humans are animals too.’

Glaswegian five-piece Spinning Coin are yet another exciting band to emerge from the cities fierce DIY scene, in recent years writing cool indie-pop full of intelligence, inclusivity and optimistic openness, in defiance of the pessimistic empathy within present day societies.

‘We were all fans of each others previous bands and we wanted to try playing some music together.’

Having formed just over three years ago, the band put out their debut single ‘Albany’ in the early part of 2016 after one of their demo cassettes ended up in the hands of indie-pop legend Stephen McRobbie of ‘The Pastels’.

Proving an irresistible discovery; McRobbie immediately signed them to his ‘Geographic’ label, recommending them to Domino Records, who have just released their eagerly anticipated first long player, ‘Permo’.

‘I think it just came naturally, we are just writing about how we feel’

Released last week, the band recorded with Edwyn Collins at his AED Studios and at Green Door Studio with Stu Evans. ‘Permo’ spans 14 tracks of expertly executed guitar pop, tackling diverse themes, such as privilege, government corruption and finding your place in the world.

‘We went to the Highlands to record it which was a new experience for us. I think we were mostly listening to hits from the 60’s on the radio.’

The band welcomed my questions with pleasant, positive intellectual answers, without a hint of cold shouldered responses, which can often be the case when tackling strong topics with a band on the brink of huge popularity.

A ‘band of the people’ is certainly a rare breed nowadays, more like, bands of social media, or of that ‘moment’. I guess, having honed their craft for a number of years within the DIY aspect of

art and visibly knew one another prior to formation, are a band whom share the mutual value of humanity within art and thought.

‘Nobody needs money, it’s there to serve us but we have ended up serving it.’

With ‘Permo’ finally seeing the light of day, Spinning Coin plan to keep the ball rolling – and the tour van moving – well into 2018 and maybe another album for their people! 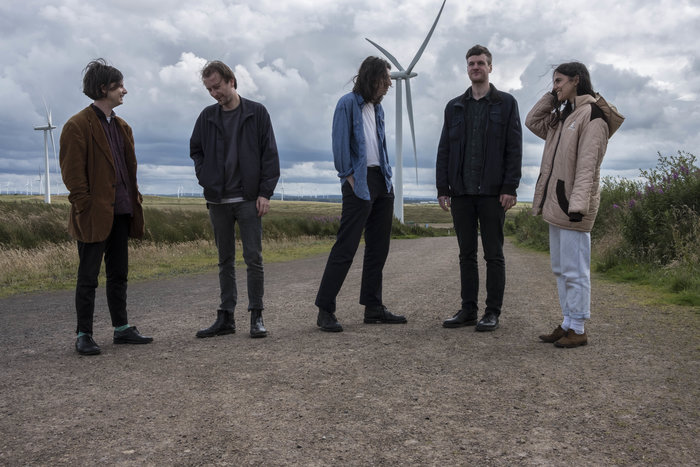 Could you explain what exactly inspired the band to form and create?

We were all fans of each others previous bands and we wanted to try playing some music together.

Why did you add a new member, in the shape of cool vocalist, Rachel Taylor?

We wanted to add more sounds and influences to the band. Rachel is an amazing musician and we always wanted to do the harmonies live, so Rachel was the perfect person to add.

An advert for a hypnotist coin in an old comic!

Are there any songs on ‘Permus’ that have special importance to you, that you really enjoyed recording or that are sentimentally important?

We love all the songs and really enjoyed recording them. Metronome River is one of the first songs we played together so it feels a bit special to us.

Were you listening to anything specific or did you have any specific rituals anything regarding this album that differentiated it from your previous releases?

We went to the Highlands to record it which was a new experience for us. I think we were mostly listening to hits from the 60’s on the radio.

How was the recording process and why did you select, Stu Evans, as producer and engineer?

We had all previously worked with Stu and really like his style so we wanted to work with him again.

What is behind the significance of which draws the band to DIY, collective based groups?

We are involved in DIY because lots of our favourite bands are DIY. It was what got us into playing gigs in Glasgow- realising that there was like minded people making music for a love of music and expression rather than to get on some kind of industry ‘ladder’! 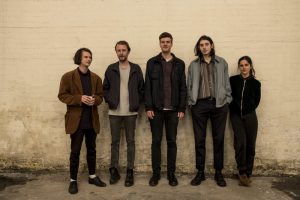 Why did you decide to write about the two extremes of privilege and under privilege, which is a potent/under lying theme of permus; was it any personal experiences or insights, which led to this?

I think it just came naturally, we are just writing about how we feel. It just happens to be that some songs are about these subjects. Everyone is effected by this disparity in society.

Could you explain the reasons behind what you describe, on your band camp, ‘The social and cultural climate that’s closing down possibilities for difference and community’

We didn’t write that!

How does the bands future compare to societies?

Hopefully, it will all be rosy but who knows! I hope the world can unite and realise we all have to look after one another, unfortunately that doesn’t seem too likely at the moment though.

How do you define escapism and what ways do you search and enjoy this concept?

I don’t think i can define ‘escapism’. I don’t know the difference between escapism and politics. It seems all humanity is trying to escape the reality of the situation. We have one world that we need to look after.

What is the ‘Class war’ and ‘stupid rules’ that you passionately sing of, in the cool track, ‘Money is the drug’?

The ‘class war’ in that song is a reference to a headline in a newspaper that was to me deliberately divisive. People are told they belong to certain group in order to uphold a hierarchy that doesn’t exist outside this financial based society we have created. The stupid rules are the boxes we put ourselves in and the importance we put on money. Nobody needs money, it’s there to serve us but we have ended up serving it.

Describe your band by color?

From vibrant green to dark green and all the greens in between.

When I’m happy and well rested.

We are ALL humans. We learn from humans and animals and trees and everything else. Humans are animals too.

Is there ‘ANYTHING’ you wish and think you could change about ‘anything’?

World peace, we need it.

Even though it is an independent label, I must ask, how is it working with Domino records home to some pretty hyped bands. You are a DIY band so what led you to working with them and Is there a need for labels nowadays?

Geographic/ Domino approached us to release a single and it has led on from that.

Why should people bother to check you guys out?

People can do what they want! Hopefully some people other than us like it tho!

Does Glasgow inspire your lives and is it worth a visit?

Definitely worth a visit, we live there so it inspires us in many ways.

Who cuts your hair?

Whoever has the sharpest scissors at the time!

If you had to choose one song to invite our readers to your world, what would it be?

In some of my interview, certain bands have expressed a need for record labels to exist, even majors. Do you think any labels are needed for bands to become successful nowadays what with the power of the internet?

I think there are many ways to become successful and success can mean many different things.

How do write and then decide which songs make the cut?

We took a while to chose the songs. We tried to chose songs that we thought worked well together. Whatever feels right!

No! There are loads of good ones! We are vegan so it’s chips all the way! Lebanese food is a particular favourite.

What inspired the song ‘Albany’ and the concept behind the video?

Is a song about inclusivity and openness. The video was just a fun morning before a tour with the amazing Roxanne Clifford filming.

How important is Green door studios in Glasgow?

Very! Lots of bands have formed there and they have done many important things for Glasgow and beyond. Including setting up other studios and giving young people opportunities to record.

Is the glass half full, or empty?

I don’t want Scotland to separate from the rest of the UK. How do you guys feel?

We want everyone to live together in peace and harmony. Scottish independence is a very small issue amongst many bigger ones. We are told they belong to a certain group to uphold a hierarchy that could be destroyed if people realised we are all of equal worth, and really we all have more or less the same basic needs.