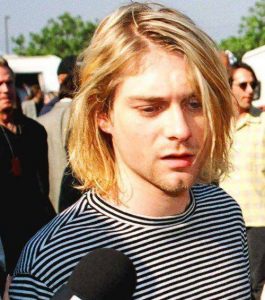 Kurt Donald Cobain, one of the greatest rock stars America has ever produced, ended up tragically committing suicide while on top of his talent.  Cobain was born in 1967 in the small town of Aberdeen, Washington.  In 1987, he formed the grunge rock band Nirvana with Krist Novoselic and within a few years took it to the top.  Nirvana released its debut album, Bleach, in 1989 to underground acclaim.  The band’s second album, Nevermind, attracted mainstream radio, which—along with the influence of MTV—made Nirvana popular worldwide.

Nirvana’s music has remained influential to music lovers from all walks of life.  Like a Picasso or Kahlo, Cobain is an artist whose work is timeless, and whose persona, thus attracts curiosity from a modern audience.  Since Cobain’s death, there have been an overwhelming amount of cultural portrayals of him; it’s difficult to peer through the mythology to understand the artist.  The Sankofa Review asked Colin Keane to present Cobain as he is: painter, writer, musician, and Brahmin monk.

“He who in his vision is free from doubts and, having all, longs for nothing, for he has reached the immortal nirvana—him I call a Brahmin.” –The Dhammapada*

Could Kurt Cobain have been a monk?

A reading of The Dhammapada—the “how-to” for aspiring Brahmin monks—reveals that several of the virtues required for monkhood, Cobain himself possessed.  Coincidentally, we find these same virtues contributing to Cobain’s brilliance as an artist.  Here are a few:

1. Strength of mind over body

“Considering that this body is frail like a jar, make your mind strong like a fortress…” (Mascaró 41)

It’s easy to imagine Cobain renouncing the body completely and championing the mind, in the manner of a Brahmin monk.  Cobain suffered from intense stomach pain throughout life and often expressed disdain for his thin frame.  It was strength of mind that allowed Cobain to conquer his physical pain.  Despite his stomach condition, Cobain created timeless music and traveled the world.  Cobain even transformed his bodily pain into a vehicle for his art.  In Kurt’s burning stomach we discover the source of his voice.

“And the man whose mind, filled with determination… ‘he who goes upstream’… he is bound for the joy of the Infinite.” (67)

The cultural myth of Cobain portrays a lazy truant, but in fact Kurt was quite determined and active, at least in the name of his art.  Beneath the disguise of a “slacker” we find a musician rehearsing incessantly and touring the world.  Nirvana’s music and artistic vision drove fiercely against the mainstream, and at its origin was a writer, Cobain, who launched this vision from a logging city, of all places (Aberdeen, Washington).

Cobain’s ability to manifest his artistic dream in the face of familial and social alienation is proof of the artist’s determination.  Just as the Brahmin forges ahead in the face of peers tempting him from his path, Cobain chased a vision that few others believed in or supported where he grew up.  To pursue music, Cobain had to emerge from an environment stacked against him.

“Those who have high thoughts are ever striving: they are not happy to remain in the same place.” (48)

Cobain was very ambitious, and for this reason found difficulty enjoying his success.  Just as a Brahmin ever strives to attain enlightenment, Cobain lived a restless life, often chasing an ideal or some higher sense of personal freedom.  Punk rock was the ideal Cobain sought to embody as a young man, but at some point in his maturity Kurt became disenchanted with this ideal.

The artist is just like the Brahmin with his instinct to evolve, to avoid stagnation.  Having achieved global success in the music industry, Cobain may have abandoned music completely and pursued his talents in visual art or writing had he lived.

“…one is the path of earthly wealth, and another is the path of nirvana.  Let the follower of Buddha think of this and… let him ever strive after freedom.” (45)

Listening to Cobain’s candid thoughts on wealth, it’s clear that money did not bring Cobain fulfillment or inspiration. 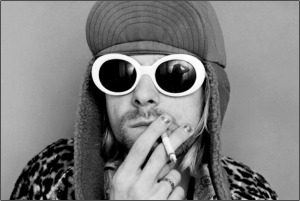 There is also proof of this in his work.  Consider In Utero, Nirvana’s follow-up to the commercially explosive Nevermind.  Had Cobain been influenced by the attainment of wealth, he would have crafted In Utero essentially as a Nevermind: Part II.

Yet the album is a radical departure, and far less commercial than its predecessor.  With tracks like “Radio Friendly Unit Shifter” and “Scentless Apprentice”, Cobain is blatantly eschewing commerciality for artistry.  Novoselic has said of the album, “In Utero is a testament to the artistic vision of Kurt Cobain.”

In the style of a true Brahmin, Cobain sought personal freedom over wealth; he merely strove for this freedom through his art, rather than through religious observance.  Cobain remains relevant because his music still entertains and inspires, but also because his persona is endlessly interpretable.  Why add to the heaps of regurgitated caricatures of Cobain the “doomed artist”?  Viewing Cobain as a Brahmin monk gives us a fresh perspective of his noble cause, and it consequently uncovers certain origins of his greatness.

This article was contributed to ASU by the wonderful, Colin Keane. A studious writer from the Sankofa Review blog.

*The Dhammapada is a collection of aphorisms that epitomize the Buddhist moral system.  The selections included in this article come from Juan Mascaró’s 1973 translation.