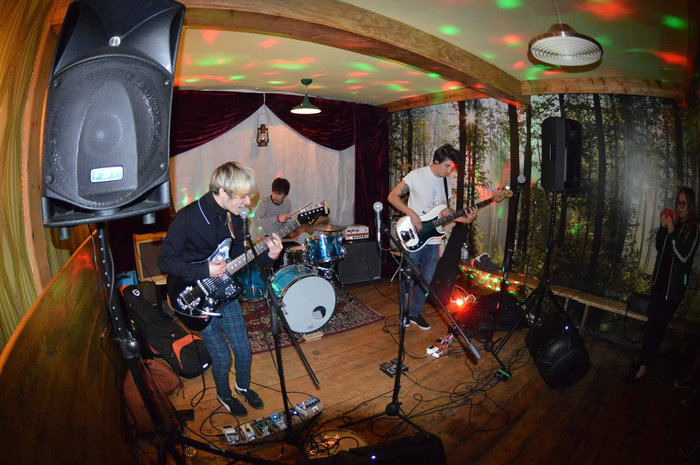 Listening to the cool vibes of debut track, ‘Downtown’ by Mystic Peach, I recall the teenage excitement of  musical conversations with mates at college. If i was attending now, Mystic Peach would definitely be one of the bands that i would be raving about and urging friends to get into, whilst wrestling with the excitement of eventually catching their show.

Born in the city of Southampton, and armed with the coolest band name; Curtis Gale and Co, are already writing anthems filled with vulnerable, addicting, youthful verbiage. I hear a band with eclectic tastes, informed by the great heritage and history of guitar music.

‘Downtown’ is their debut offering, a track conceived and honed via the bedroom and designed to comfort any “self proclaimed loser”. The song’s rainbow riff stumbles sprightly along, like a stoned group of friends around town, until the holy hook rips in on the two- minute mark sparking take off.

‘I think as a band, we are frustrated with people’s over-sensitivity and it’s a bit shit being young nowadays.’

It is an exquisite track, much like the flight experience of the Boeing 777, in which you do not realize disturbances, only the wonders of chartering through the clouds in the sky.

‘Stop bitching and just enjoy what you do’

Mystic Peach is also the name of a fruit beer from Belgium, which you can purchase on Amazon. The description of the beer, ‘It smells fresh and tasty and has the full flavor of sun-ripened peaches combined with wheat beer. No preservatives.’ aptly reveals my thoughts on the bands fresh vibe, tasty tunes, full flavoured attitudes, and no bullshit.

‘It came from a drink I was drinking, whilst dating my now girlfriend.’

My chin wag with the band revealed a band brimming with sharp wit, sensitivity, alongside, powerful personality. I have no doubt that we are witnessing a band who were made to entertain and inspire across the globe. In their words, even The Strokes had to play ‘shitholes’, in the very beginning. 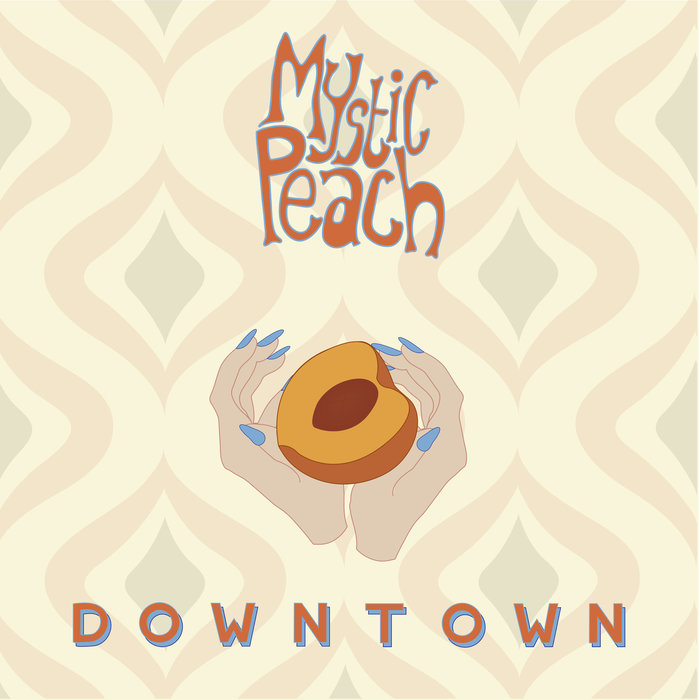 Why did you bother forming a band when guitar music is supposedly dead?

A: Who said it was dead? The same reason as all the other guitar based bands you’ve interviewed… probably.

How or what inspired the band name, ‘Mystic Peach’?

A: It came from a drink I was drinking whilst dating my now girlfriend. The lads liked it so it stuck.

What inspires the band??

A: The tiny percentage of maybe never having to work in an office again.

A: It’s song of false hope, false lust, false meaning… yet, even though you know nothing will happen, you still go along with it anyway. Only losers chase love, even if it is false. Relatable to any ‘self pro-claimed loser’. And no, we’re just losers.

Will there be an upcoming music video release and can you delve into that?

A: If there is then I haven’t been told about it. But, you never know what message you will get tomorrow…

How were your hands tied down, in down town and what were the things, ‘you dream and said’? Such great lyrics!

A: Thank you very much. ‘My hands were tied…’ part is just an expression, stunned in her presence, say. And I’ll let the listener’s imagination decide that. What it means to me shouldn’t decipher what it means to you/the listener.

Which current bands do you lads dig?

Does, Heartbreakers the100 capacityvenue in Southampton offer salvation for young bands, such as yourself?

A: No, not really. You can have a 100 small venues that will be willing to play you, but it’s the people that come to watch you that’s the salvation for both venues and bands. Power to the people!

How does it feel to be young today?

A: Confusing probably, I’m quite tired a lot. Especially with being young now, feeling oppressed but throwing your unwanted opinions (especially in politics) at people without hearing their opinions seems to be in fashion at the moment. Conversations always ends up with someone being offended or insulted. I think as a band, we are frustrated with people’s over-sensitivity and it’s a bit shit being young nowadays.

Describe your band by a color?

A: Mainly at night, I love writing at night so I can’t be disturbed, but, that often results in me falling asleep at my desk at work.

A: To the majority of human kind? I don’t. I think they are selfish, rude and very self-centered. That shows no reflection on our friends and family though, they are beautiful. 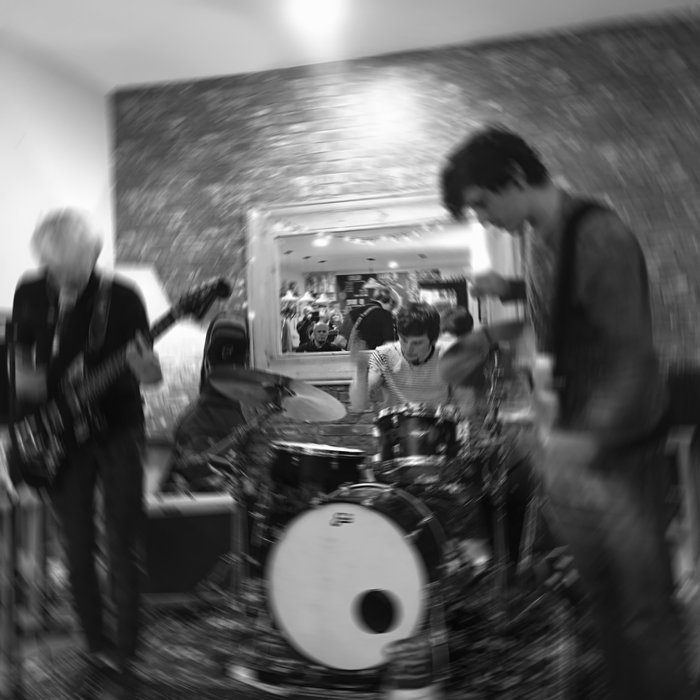 Is there ‘ANYTHING’ you wish and think you could change about ‘anything’?

A: I would change the name of colours so the colour blind people can have a good time too.

A: It’s great, we have an extremely close relationship, both working and as friends. And it led because they liked our music and demos we showed them. They allow us all the creative freedom we desire, and that takes enormous trust. Our ambitions are big but realistic, we’re in sync and it’s nice feeling.

why should people bother to check you guys out?

A: Well, The Strokes had to play in a shit hole once…

How is Southampton and what do you recommendto dothere for our readers?

A: It’s alright… and to come visit the awesome new Heartbreakers bar/venue and the legendary Joiners to watch the local bands that play here, of course!

What excites the band?

Hobbies or interests outside of music?

A: Curtis: Staring at animate objects

I think the music industry is the best it’s ever been – you can find the strangest music you want. Therefore, why do you think we live in the age of nostalgia and is rock and roll, truly dead?

A: Every era would rather be in the era before theirs… you don’t have to try hard to find the good songs. Rock ‘n’ roll never left the 50’s. It’s probably the hardest to make money and/or breakout in front of all the other bands out there-but hey, if you can’t be bothered, just shout about how much you love the weekend and drinking shit, eggy pints in British pubs.

If you had to choose one song to invite our readers to your world, what would it be?

In some of my interview, certain bands have expressed a need for record labels to exist, even majors. Do you think any labels are needed for bands to become successful nowadays what with the power of the internet?

A: Record labels do exist. Of course, generically speaking you need record labels to become successful commercially. The internet is just another tool to promote your band/art/business etc. I didn’t start a band to talk music politics anyway, quit complaining and fucking work hard. It’s an industry built on luck, timing and sometimes just pure talent. Stop bitching and just enjoy what you do.

How do write and then decide which songs make the cut?

A: Funnily enough, with my guitar and voice. Then I show the lads and they say yeah or no, it’s all in the vibes.

What does the diary look like for the next 6 months?

Prior to 2004, selling out would be playing your music on advertisements, etc! Can you even sell out these days, if it is so hard to even sustain a career being creative, until you become mainstream, or once you put something online, is that mainstream, in itself?

A: You sell out as soon as you send shameless plugs to your Facebook friends you haven’t spoken to in 7 years, to listen to your song… I don’t think I’m in the position to have an opinion on that, anyway. Maybe I can let you know if we get there, eh?

Thank you for your questions and hope you enjoy our single. 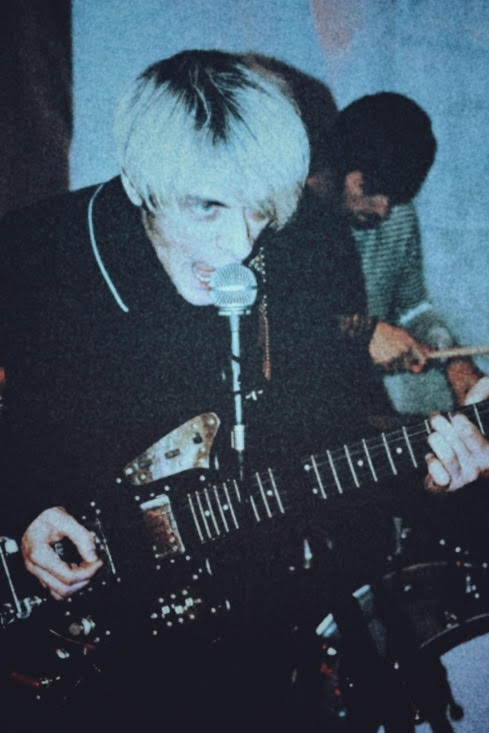