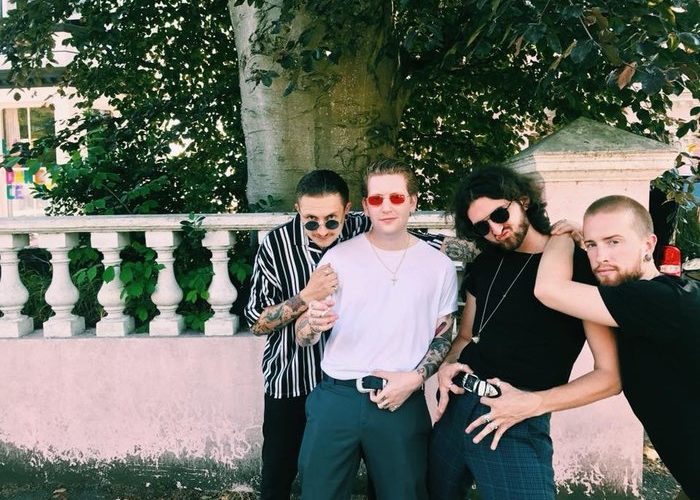 Hedonistic Hastings quartet Kid Kapichi are one guitar group armed with an arsenal of songs, which fight the claims by the musical media regarding the present and future state of the genre (plus, their bad taste of ‘diet indie’ bands they plug after which. 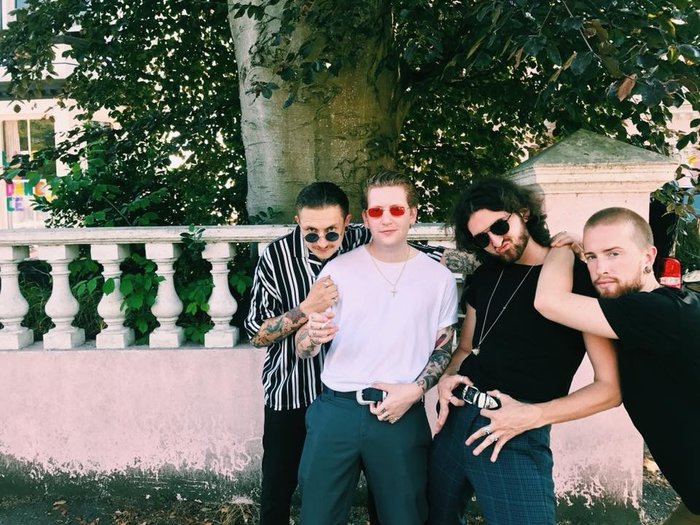 “Music there is all about the community; young and old, new and establishes all mix together,” says Ben. “It’s ingrained in us a little bit.”

‘Mosh-pits and melodies galore, the band’s live shows are equally as electrifying as their music’ – Underground_England

They are a festival headlining band in waiting, absolutely ripping the roof off of the Hackney, Moth club when I caught them supporting CRX, last month.

Their vibe is a mix of melodic noise, honest street lyrics, alongside massive catchy hooks.

The frantic four-piece have built a reputation for raucous live shows where chaotic mosh pits and crowd surfers crushed to the ceiling is just part of the status quo.

Appearing like chalk and cheese, Jack and Ben share lead vocals, conjuring the best indie duet since Pete and Carl lit up London over a decade ago.

‘This is one of the best bands I’ve seen in years. If I was a kid watching, these guys would make me want to pick up a guitar and play’ – Dave Parsons, Sham 69

For the elder millenials who got lost in nappies, pay attention because Indie rock, and the kids are alright with these dudes!

yeah it was great. The strokes were for us, like many, were a huge influence starting out, and CRX were amazing. Definitely had some interesting tunes. Very creative tunes actually.

Did you guys manage to hang out, or gage any tips?

We didn’t get too much time to hang out due to time constraints, but Nick was really cool from the get go and just really supportive towards the band.

The band started when me ( Jack ) and Ben lived together in Hastings. We wrote a couple of songs together for fun at the time and one day coughed up ‘ice cream’. Decided to recruit some old school friends to gig it and record it and it went from there really. Never quite expected it to take us this far but it was the best journey I’ve ever started and I can’t wait to see what lies ahead.

Kid Kapichi is a cool band name. What is the deal?

We struggled to find a name that was ‘cool’ or ‘original’ enough for a long time. We actually went through quite a few name changes, mostly tongue in cheek, before we arrived at Kapichi.

People always ask us what it means and I never have the heart to tell them it means nothing, but it does, mean, nothing.

Do you enjoy the hustle of the modern day band?

I really don’t even know anymore.

I think the answer has to be yes. Because we definitely wouldn’t still be doing it if we didn’t.

I think nobody really understands, including ourselves in the past, how much ridiculous hard work goes into being a semi functional band.

I think we’d all agree that we wish it was just a case of writing music and the rest was taken care of, but it isn’t and probably never will be.

However. It has taught us a LOT and I mean A LOT. you have to be your own manager. Agent. Publicist. PR guy. Graphic designer. Tour manager and accountant. Luckily however we’ve made a cool tight knit team around us recently and weights are definitely being lifted from our shoulders and we can focus more on the musical aspect of things.

Shit. Exciting. And a bit hopeless. We’re at the forefront of everything. Everything is new and a first, and we’re young enough to take it on and experience it first hand.

However you can’t help but feel a bit defeated working for minimum wage just to save up for a deposit on a house that goes up in value quicker than you can ever save. That’s my main concern. I don’t really know how it’s all going to end, because it can’t continue like this.

I’m pretty sick of being told it’s all relative though. It’s not. 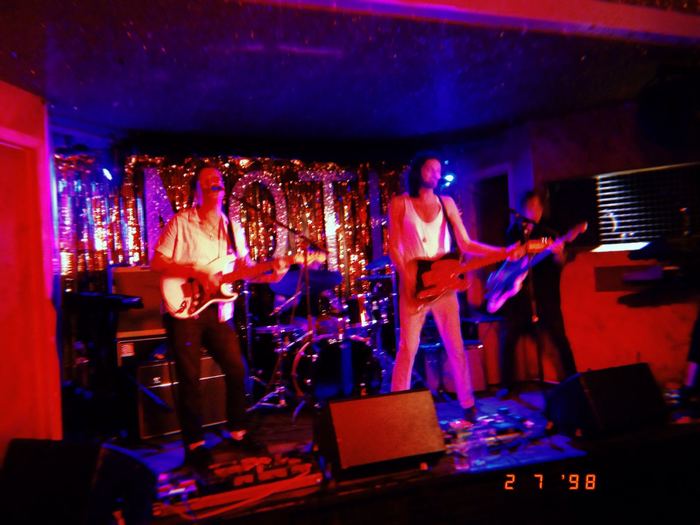 Can modern artists ever be scolded with the label of ‘sell out’, in modern day music?

It’s a difficult one to answer. It depends what you class as a ‘sell out’ really.

Are you a sell out if you make popular music ? I don’t think so.

At the end of the day, it’s a business and it’s getting harder and harder to make money in this industry. However, saying that, I know that personally, we try to write what we want. What we want to listen to and never let ourselves be infected with what would get us more radio plays or whatever. I think it’s just important to have that integrity to make something you think is of high quality and means something to you.

Tell me about the recording of Ep2 and have you diverted away from the vibes of EP1 at all?

I wouldn’t say we’ve diverted away. Definitely progressed and pushed the sound forward as well as having clear ideas on production and songwriting. It’s nice though because it’s a 50/50 split from fans. A lot of people like the low-fi vibes of EP1. And a lot of people like the efforts we’ve made to push the production on EP2. I think you’ll hear a bigger change in what’s to come. Every ‘next’ thing we work on becomes clearer in our heads and we find our own little signatures and tricks to put on it, it’s definitely a progression on the first 2 as we continue to hone our sound.

Why have chosen to release music in the EP format, rather than album?

In the way that modern music is distributed and the DIY nature of it all, it’s much more manageable to have bite size chunks to digest. Plus it’s important to have constant content and releasing an album every couple of months is not gonna happen. Plus, as we’re a relatively new band, pushing our foot through the door, it’s nice to be able to put something out that can be followed up with something relatively different a few months later. It definitely helps the creative side to be able to draw a line in the sand and say, okay what do we wanna do next.

Outside of music, what do you get up to and enjoy?

We all hang out a lot outside of the music. We’re all good friends and have been for years.

We go to a lot of festivals and gigs in Hastings. Go to the football. See our friends and families. The usual stuff.

How has Hastings developed the band and as individuals?

We wouldn’t be the same band without Hastings. There is so much variety musically in Hastings and we’ve all been involved or influenced by that massively.

Some really world class musicians live in Hastings and we’ve all had the pleasure of playing music with them. It’s such a give and share kind of town.

Why do you think that your fan base is quite diverse?

I couldn’t tell you but it is something we’ve noticed and appreciate.

I guess our music spans multiple genres and eras so I suppose that makes it easily accessible. A mix of heavy riffs and pop vocals can bring together two groups that would never usually be in the same room together!

You are unrecognizable now to the band that I caught in the Hastings music blog, ‘The Stinger’. What instigated such a dramatic switch in vibe, other than natural evolution?

We have aged quite a lot since then, unfortunately. That makes a big difference as we learn about ourselves and our band.

Which colour would you use to describe the bands vibe?

Do you think the internet is an overall positive having funded your EP through Gofundme?

Overall to the industry, the internet is helping to fix a problem that it caused in the first place.

I mean, the free downloads and streaming services have been pretty catastrophic to the industry. But for a relatively unknown band the internet is the best tool you could ask for.

In your, Dan Matthews’ video for Puppet Strings, we see how you play with time, shadows, the grotesque and the concept of enjoying being claustrophobically kept captive, before breaking free through performance in a cavernous round Georgian Church. What or whom inspired this brilliant video?

Well firstly. I’m glad you’ve taken all that from it because that is exactly what we set out to achieve.

It was originally an idea of mine. The opening scene was something I’d wanted to do for ages. I sat down with Dan and we ran ideas back and forth for a week or so and just went for it.

Which song would you select for our readers to listen to having not previously heard your material?

Puppet Strings as it’s the latest single. But take it on the chin gives a good all round Kapichi vibe.