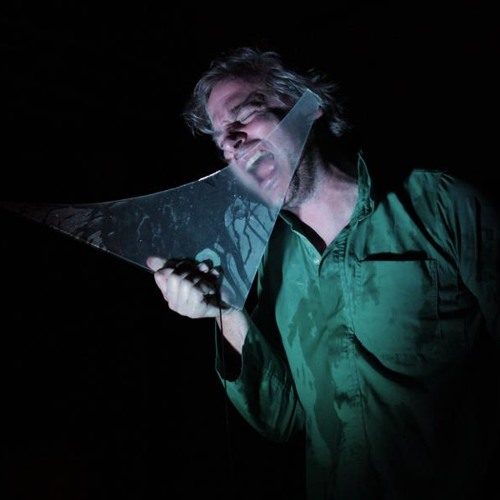 What’s been described as «a trumpet player trapped in a two dimensional universe» is in fact the unique work of Lucas Abela aka Justice Yeldham, a maverick musician with an unhealthy obsession with sheets of broken glass. In his now infamous show which has astonished and bemused countless people in over 45 countries, Abela ecstatically purses his lips against panes of amplified glass whilst deftly employing various vocal techniques ranging from throat singing to raspberries, to turn the discarded shards into crude musical instruments. The results are a wild array of oddly controlled cacophonous noise teetering on the edge of music. This one of a kind act re-defines the expression ‘don’t try this at home’ and quite simply needs to be witnessed to be fully appreciated, let alone understood.

How did you become to behold the name, Justice Yeldham?

Longish story but Justice Yeldham was a NSW supreme court judge who gassed himself in his car after being publically outed as gay by a conservative politician who thought he was a paedophile whose crimes where covered up by the CIB (police) but his actual crimes where mostly beat related homosexual adventures at train stations around Sydney.  The original name was Justice Yeldham and the Dynamic Ribbon Device ( the coke font). When I came up with it around the time he died I wanted something that sounded something like ‘Dr teeth and the Electric Mayhem’ as I love that band and I also hoped it would wind coke up and end up in lawsuits for a batch of free publicity which never eventuated as the noise scene in Oz is pretty low key.

Tell me about how your self created relationship, or partnership with an amplified, distorted pane of sugar glass?

Well its sort of just an evolution of turntablism which is where I started as a music maker, however over the years I’ve removed all recognisable elements and now just play an enormous diamond tipped stylus which I vibrate with my mouth.

How does your live performance differ from the recording studio performance?

Greatly, there is something about a crowd that helps initiate a type of anxious state that helps he revert into myself and get to a sort of ecstatic point where I can more freely improvise. Recording is harder but recently I started recording at home while live streaming which has helped.

Could you give me any information upon your recent album ‘Cassingle babachchi bop’ please?

Nathan from Jerrycore had a bunch of 3 minute tapes so we decided Cassingle!

What were, or are your influences?

Hard to define influence as it comes from all experience but ultimately like everyone my adolescent penchant for bands like Einstürzende Neubauten lead me into thinking of making music in unconventional ways.

In what differing ways can we ‘heighten people’s moods’ which you like to do through performance?

I think what I do, cause it is intrinsically dangerous, heightens peoples empathy or something for me, at the same time they are worried for me they also want me to play on so its contradictory or something, hard for me to explain as that side of my show has only be told to me.

Are you essentially a performance artist rather than simply a musician?

No I’m a musician in the free noise tradition

Do you have any advice for Generation Z?

What is mainstream nowadays?

How did you meet Death Grips leading to a cool collaboration (year of the snitch)?

Back in 2010 Zach was in Sydney with the Boredoms and I was setting up side shows where we decided to do a set together, years later I was passing through Sacramento on tour and ask him about gig possibilities and he suggested I record with them instead.

Your shows have recently been frequented by a younger audience. Which age range gets it the most?

Dunno! but kids as young as 12 have been showing up accompanied by confused parents, I guess the whole death grips thing has brought an entire new generation of people to me, so no more playing in-front of a bunch of middle aged men, which is so wonderful I cant explain.

How is the tour going?

I’m at the airport ask me tomorrow

This tour and then back to being a full time dad.

How do you feel that your performance, creativity and artistry has evolved over the years?

Too slowly, I think if I had more drive I could have achieved more.