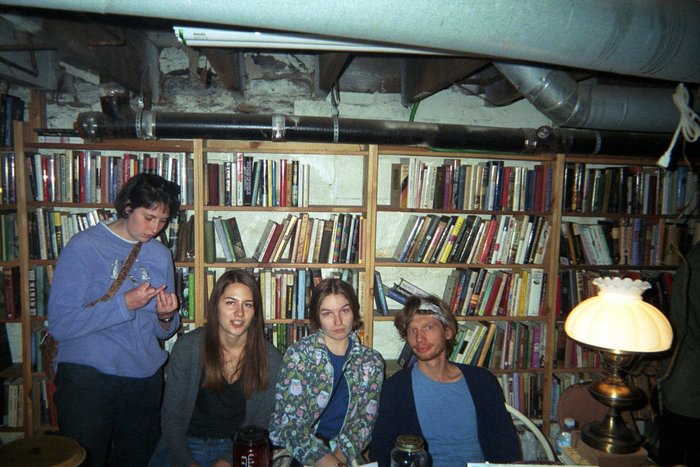 Interview with the NYC band 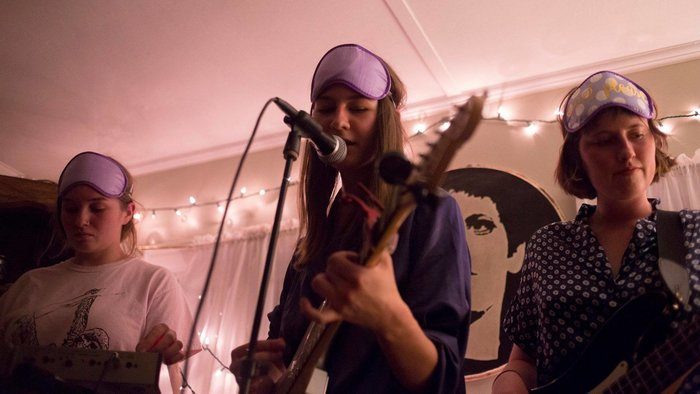 ‘Honesty, emotion, observation, dissatisfaction, experiences, reflection, nothing, and everything!’

These are the naked, poetic, excitingly cool emotions described by college band, ‘Slumbers’ on what informs, and inspires their songs. Such creativity feels  magical, captivating my sensibilities with their dreamy escapist perspective on young adulthood, striking a chord with all in society, brought together with minimalist pitches, whispered in rich, and soothing vocals.

‘Our band’s creativity is also inspired by sleepiness or youthful feelings and experiences.’

Slumbers are a unique collection of New York songwriters and vocalists – Sabrina, Emma and Claire and recent addition on drums, Stephen – who play shows in eye-masks and dressing gowns, and whose tunes are sweetly soporific.

We all grew up in Penfield, a suburb of Rochester, NY. We were all good students and pretty unsatisfied individuals

In a nutshell, imagine a band of Daria’s with much less cynicism, more empathy possessing a sophisticated emotional knowledge of the world, and fellow citizens. Their songs are quirky, wry and easy to quote, mirroring the majority of their peers figuring themselves out with an unknowing glance towards their futures.

‘Today feminism is less about female liberation, and more about everyone’s self liberation through education.’

The band released their EP ‘Come Over’ produced by their ‘homie’, Scott Hermo, last November with lead single, ‘DoboomSoom’, written when Sabrina from the band was so sad ‘she couldn’t get out of bed’.

‘Layin in bed feel like I’m dead, Don’t wanna get up and go out!’

The band are feverishly creative, writing new songs and possessing a ‘library of over 40 songs we’ve written and yet to play’. With an ever growing fan base, the band aims to play more shows and record their ‘forty’ new songs, alongside an extension of quirky personal ambitions,‘to be nicer, get better at taking compliments, and make more eye contact with everyone’

I caught up with the band to talk youth, modern feminism, the future, social media, their stage attire and cool EP, ‘Come over’. 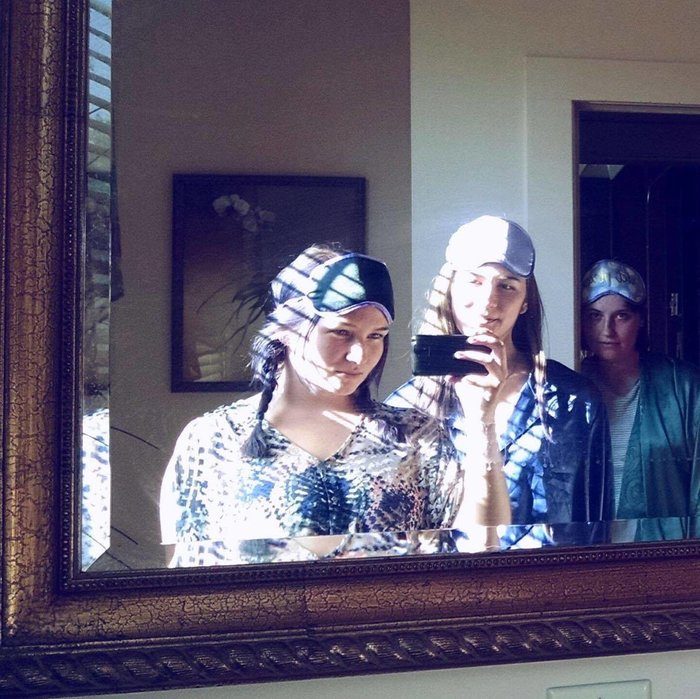 How did slumbers originate to now?

We’ve been best friends since about the seventh grade and it wasn’t until winter break of our first year in college that the band began to form. Sabrina played guitar and Emma played piano. We started to play a little bit together and showed each other songs we’ve written. Then Claire decided to pick up the bass and within the next few months we were all writing songs and that summer we had our first gig. Since we go to different colleges almost all of our learning is isolated while we communicate through the internet. For a while we’d reach out to drummers a practice before shows, but recently added “Stephen Ferm” as a permanent part of the band. We schedule all our shows over school vacations and practice together a few times before. We are constantly writing new stuff and have a library of over 40 songs we’ve written and yet to play. It’s pretty wild and odd.

I would love to know a little more about each individual’s background?

We all grew up in Penfield, a suburb of Rochester, NY. We were all good students and pretty unsatisfied individuals. We played sports, did some school government, made art, took music classes, and ate lunch on playgrounds. We tend to spread ourselves thin, but since highschool we do that in more interesting ways. Sabrina now goes to RIT for 3D digital design, Emma attends Belmont University for Motion Pictures, and Claire goes to Ithaca College for Film, Photography and Visual arts.

Any other creative outlets or passions?

Yes, many. Film, photography, cinematography, hand drawn to 3D digital animation, performance art, sound art, painting, ect. We all go to school for some sort of visual art. We’re interested in very similar things (art & music) and like exploring new forms of it and sharing them with each other.

What inspires the band creatively and daily?

We’re sad and lonely and live too far from each other. Our band’s creativity is also inspired by sleepiness or youthful feelings and experiences.

Does your stage attire reflect the name, Slumbers meaning ‘a sleep’. What exactly inspires the eye-masks and dressing gowns stage attire?

It’s comfortable for us. We think the silk is funny. We do love sleeping and are often sleepy so it happens to tie in with our name well too. 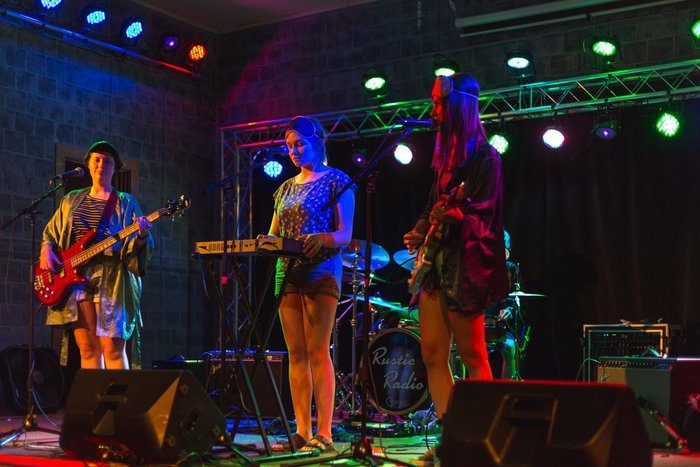 “I wrote ‘DoboomSoom’ one morning, freshman year,” Sabrina says, “when I was too sad to get outta bed but could reach my guitar.” Are you able to describe what brought about such an episode?

I think I was just sad about someone and also that my friends were gone. I didn’t really like what I was doing at the time either, so I would often just skip everything and stay in and play music and draw stuff.

You deal wonderfully vivid with social anxiety on the brilliantly compelling “Stay Hidden’’. Can you explain the track to our readers?

Like DoboomSoom, I too was laying in bed feeling like I was dead. My roommates were in our living room celebrating someone’s birthday and texted me asking if I was home…which I was…laying in my dark room watching The Office on a very low volume. Instead of going out and joining them, I just stayed put and wrote a song about why I can’t have fun sometimes.

What informs and inspires your lyrics, which captivates my attention?

Honesty, emotion, observation, dissatisfaction, experiences, reflection, nothing, and everything!

The sweetly soporific EP ‘Come Over’ was released back in, November. Where was the EP recorded, who produced and how were the sessions?

Scott Hermo, our HOMIE. We recorded the entire EP in five days in a small and hot room of Scott’s house, last summer in Nashville. He recorded it and mixed it and he’s incredible and we love him and I think he owns our souls now. He also has an amazing band that we like to play shows shows with, they’re called Boyscott. Recording was a lot of fun, we want to do it again. 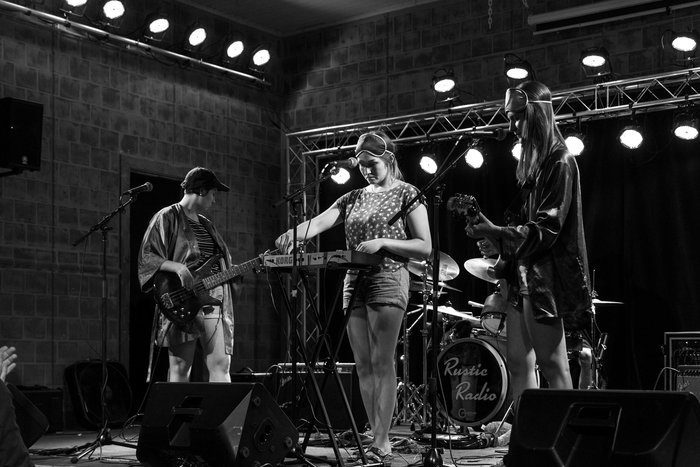 Do you consider yourselves feminists in this day and age?

Yes, however we aren’t super interested in the title, other than the rich history it holds. Today feminism is less about female liberation, and more about everyone’s self liberation through education.  It is exciting to see people besides straight femme presenting cis-women included in the “feminism” discussion. But Isolating the conversation of social hierarchies to gender is part of the problematic boxing that leads to acceptance of destructive misinformation. Sexism feeds off of all other forms of hate. It is important to be inclusive and open minded to all, but we must acknowledge that certain characteristics and identities are treated, or neglected, more harshly. Those with more privileges should utilize this to protect and facilitate less privileged people.

It can help you expand your imagined community and make you feel connected. It can also make you feel left out. Also it is weird and concerning how the computers learn what you like to see and will cater to you, but create a solid bubble of a world for you to “safely” reside in. Overall for us, it is fun and confusing. Even though it is often overwhelming…WE LOVE IT. HAVE YOU SEEN OUR TWITTER/INSTA/FACEBOOK??? But really…this band wouldn’t exist without social media because we usually live far apart. Also it is a nice way to avoid isolation as introverts.

What is the best thing about residing in NYC?

The fact that we don’t reside there haha. We actually all share the hometown Rochester, NY. Sabrina still lives there. Claire lives in Ithaca, NY, and Emma lives in Nashville, TN.

Ambitions and aspirations for 2017?

Play shows and record new songs! We also hope to be nicer, get better at taking compliments, and make more eye contact with everyone. *thumbs up* 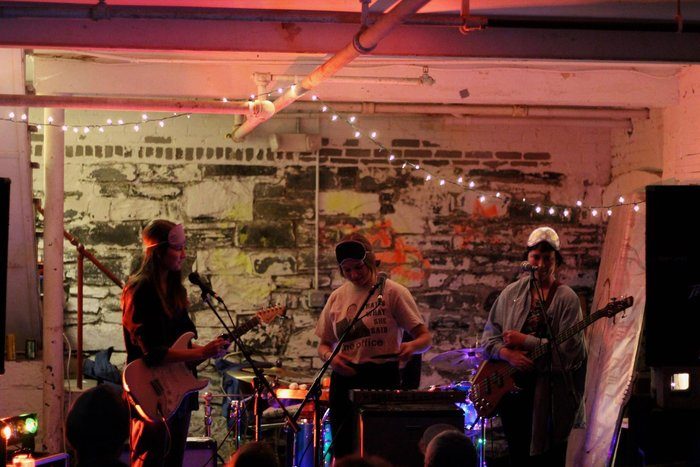