SUnwatchers. Courtesy of the artist. 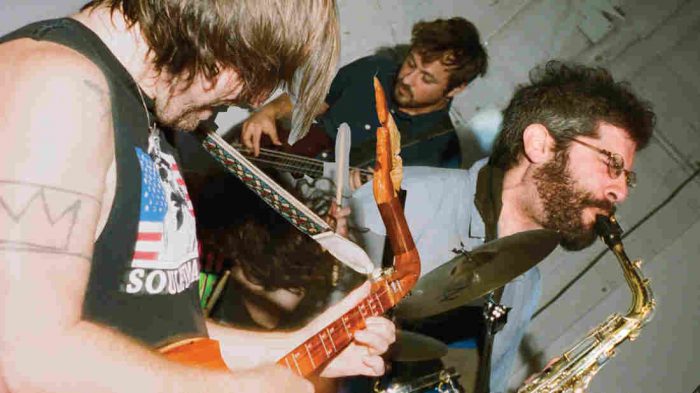 Sunwatchers. Courtesy of the artist.

‘These songs map out great pyramids and deep buried labyrinths.

Avant Garde free jazz seeks to elicit a reaction from its listeners, and The Sunwatchers powerfully pursue that tradition on their latest self-titled record, ‘Sunwatchers’. Unlike the majority of bands, Sunwatchers are unequivocal and unashamed in their aims and ambitions as artists forcing disparate reactions from critics and fans alike.

‘So yeah, you could say that stance makes for a pretty unequivocal vision of the world’.

The album ‘Sunwatchers’ released by Castleface Records takes you on a historic musical journey to so many legendary greats from yesteryear. The band are reminiscent of Ethiopiques, John Handy Band, Terry Riley, Art Ensemble meets Laddio Bolocko yet the songs are driven by ‘the passage of time and the effect of repetition.’

‘We don’t write lyrics anymore, so it’s not narrative or driven by language’

The wonderful band name, ‘Sunwatchers’ was inspired by avant-garde Jazz saxophonist, Albert Ayler whom felt that if he stared at the sun long enough, he would gain enlightenment.

Whilst the songs feel carefully crafted the band tell me there was ‘no process, schedule or plan to the record’.

‘We were just playing and drinking Coors Light and recording’

I managed to catch up with the band to explore more about this unique mob of men whom as individuals hold spectacular resumes, Jim McHugh, Jason Robira, and the experimental musician/composer Jeff Tobias of EX-NYMPH, Dark Meat, KATIEE and Peter Kerlin of Chris Forsyth’s Solar Motel Band.

‘It’s not that different from all our past work as individuals, so much as it is a culmination, hopefully.’ 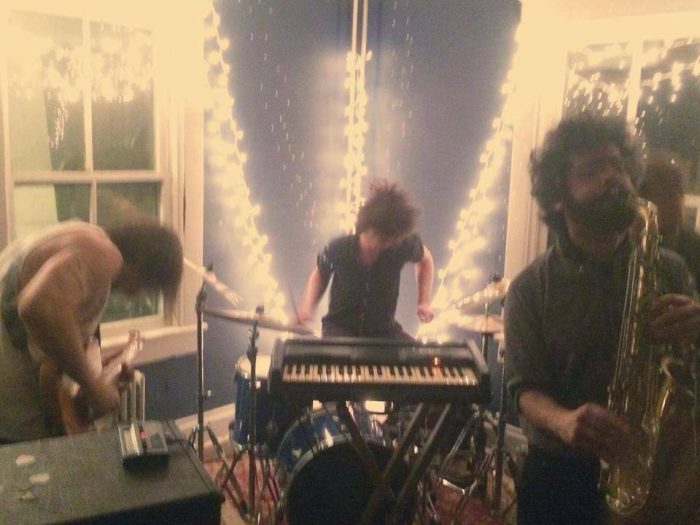 Whom or what is the Sunwatchers and could you describe your individual backgrounds?

Peter and Jeff are of Northeastern origin, Jason and Jim are Southerners by birth and by disposition. We’re an American band.

Where did the maya sounding band name, Sunwatchers arise?

It’s the name of a song by one of our all-time greatest heroes, Albert Ayler. Ayler felt that if he stared at the sun for long enough each day, he’d gain enlightenment. Some people still do that.

Having demoed many of the new album’s songs quietly over the course of three lo-fi, live-recorded releases, you have spent the last year and a half shaping your swirling psychedelic improvisations of melody and noise. What drove this process and why such a duration?

We really didn’t think about it that much. We were just playing and drinking Coors Light and recording. Sometimes we’d put music up on Bandcamp and we made that one tape, “Tomb Howl.” Time is nothing!

What are you trying to achieve with your new album and how does this differentiate from individual members past work especially your work with Dark Meat, Jim?

For the record, Jim, Jason and Jeff were all in Dark Meat. For this album, we just wanted to document these songs as best we could. Eli Winograd at Lone Pine Road Studio up in Kingston did a great job recording it, and Colin Langenus offered some important production support. It’s not that different from all our past work as individuals, so much as it is a culmination, hopefully. We don’t write lyrics anymore, so it’s not narrative or driven by language— it’s driven by the passage of time and the effect of repetition.

Your loose, rattling take on Robert Schumann’s «Eusebius» from Carnaval, Op. 9 is bottled to blow minds; it also displays just how far-ranging the band’s influences (and ideas) are. Under the Radar blog described the album «informed by everything…»

Could you throw in some more artists whom have influenced your musical horizons or more importantly this album?

Well, over the past few years, we had the great honor of backing up the late and much missed tenor saxophonist Arthur Doyle, a legend of free jazz who fell through the cracks a bit; Arthur was a genius in terms of extracting material from melodies and kinda mutating them. Working with Arthur was an inspiration for what we did on “Eusebius.” Also, the greats: Sonny Sharrock, Albert Ayler, and so forth.

Where did you record the album and whom was the producer at the helm?

Our longtime friend Colin Langenus (ex-USA is a Monster, Colin L Orchestra) provided production assists, and the whole thing was engineered by the highly skilled Eli Winograd, up at his cozy studio in Kingston NY, which is known as Lone Pine Road. Charles Burst took on the herculean task of mixing, and Sarah Register mastered it to a fine sheen.

Do you guys have specific requirements with regard to musical equipment you operate, IE guitars, amps, pedals, etc or do you frequently change your equipment?

No specific requirements other than whatever is emerging as new and interesting. Jim’s been experimenting with foreign string instruments like the Thai phin and the Turkish saz. The Korg MS-20 has made appearances on recordings, and we’ve included contributions from skilled noise percussionist Cory Bracken on vibraphone, drone violist Jeanann Dara, and others. When we’re on tour, though, it’s pretty meat-and-potatoes, give or take. 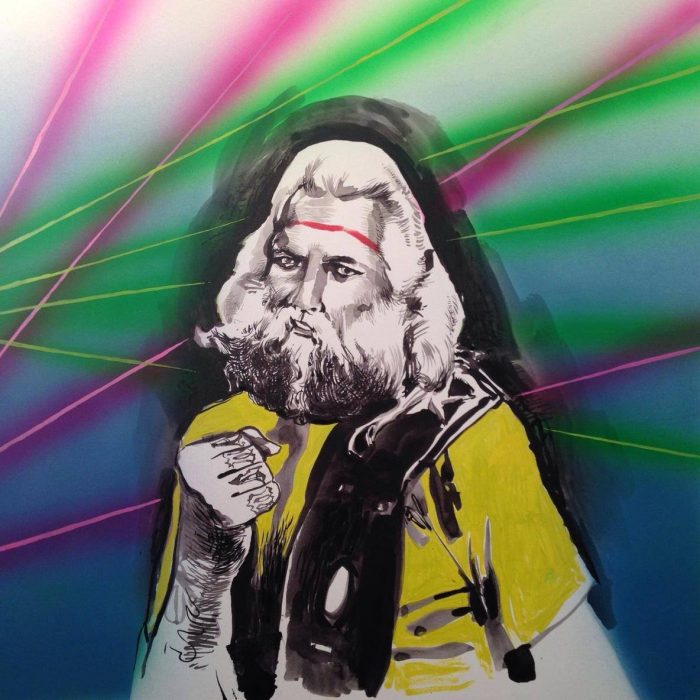 What musical projects are you working on now?

Jim, Jason and Jeff are also in the backup band for Katie Eastburn, also known as KATIEE, a onetime member of the LA-based band Young People; the debut KATIEE LP will come out on Selfish Agenda this summer. We also contributed to what we believe is the final recording of Arthur Doyle, to be issued by Amish Records this summer as well. Peter has a long-simmering project known as the Peter Kerlin Octet, and he also slays with Chris Forsyth & the Solar Motel Band. There’s more, always…

Love this wholeheartedly; ‘Sunwatchers stand in solidarity with the disposed, improverished and embattled people of the world!! Could you explain the emotions behind such an unequivocal statement?

Our philosophy is a holistic approach to life that makes the personal the same as the political. Our heroes are those who’ve stood against fascism as workers, artists or thinkers. So yeah, you could say that stance makes for a pretty unequivocal vision of the world. 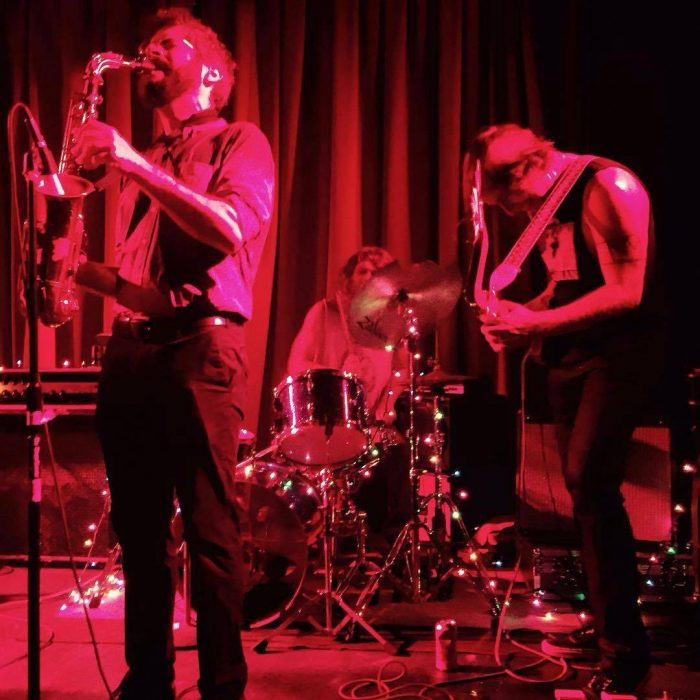 The art work is a beautiful disperse of colour yet minimal, which leads me to ask if it was a DIY band effort, or did you guys employ some unknown talented artist to create something wonderful?

We were fortunate enough to retain the talents of a fellow by the name of Scott Lenhardt, a highly skilled artist whose pet portraits and more can be found here: http://www.slenhardt.com/

Whom would you like to see succeed Barack Obama, and become the 45, (or 44th depending how you look at it) President of the United States?