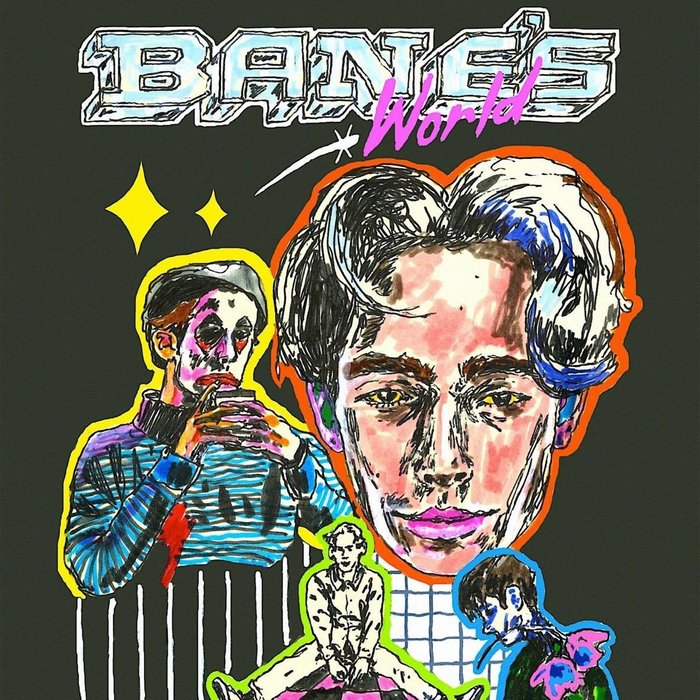 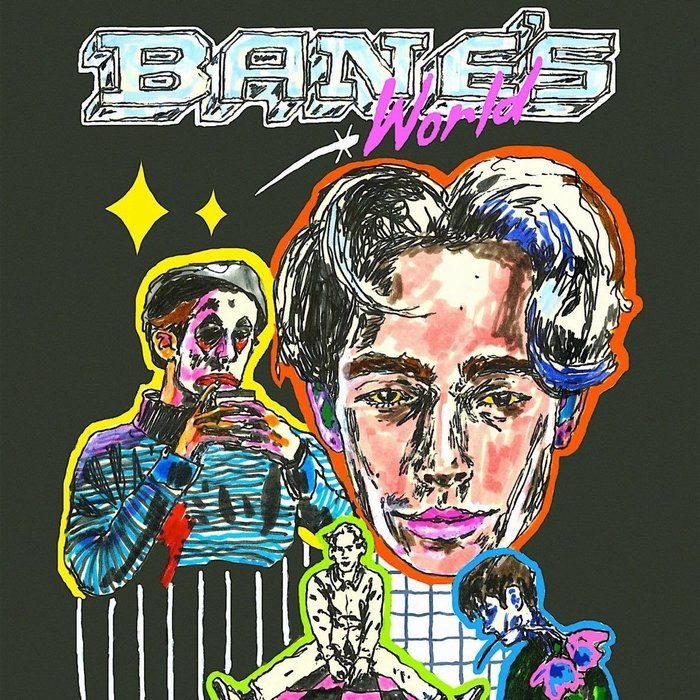 Bane’s world, party time and excellent is certainly a world to behold with one YouTuber commenting, ‘once entered you will never return home to Planet Earth’. Shane Blanchard (Long Beach, CA), who releases music under the pseudonym Bane’s World told me with amusement how his world is filled with ‘lots of sleep’, and lots of food. ‘I really like to eat and spoil myself with good food. I also really love my dog.’

Blanchard releases profoundly yearning eccentric sound bites inspired from love or his ‘bad luck’ with love whether in finding, or losing it. It is a kind of a sad thing to write about the deflation, or rejection within love yet the vibes projected within the songs only breathe positive, providing the young listener with a reassuring safety net and the elders memories of how fragile young love used to be.

You can check out Bane’s ‘world’ through the obligatory sources of social media of Human Sounds Records, his Facebook and YouTube accounts where he is a rising star, enriching an ever multiplying loyal legion of fans.

‘Well, a lot of my tunes are about love, finding it, or losing it, and either way, to me, that’s kind of a sad thing.’

It was via YouTube, where I delightfully encountered his beautifully unique video for, ‘Am I in love’. The song is a hauntingly mesmerising ode to love set to a refreshing spin of the VHS video concept, which he filmed and edited alongside his buddies. What I enjoy amongst many aspects of Bane, as an artist is how his innate DIY aesthetics transpire so well with the lyrics and melodies, which is never an easy accomplishment.

Bane fills his time beyond writing and creating with skateboarding but has high hopes to travel a lot this year, ‘step out of my comfort zone, and do things I can feel proud of.’ All in all this year would be great one, if he could just be ‘happy.’

‘People love making that comparison, and they are of course allowed to, but I just don’t really see it, or hear it, for that matter.’

With his floppy hair, Shane Hunter (Boy meets world) good looks, mercurial talent to boot, it is impossible not to be hyped about Blanchard.

‘I have insomnia so I am usually up until the wee hours of the night, then sleep most of the valuable day away.’

I gleefully caught up with Shane to get the scoop on his ‘world’, inspirations, DIY aesthetics and his dreams for the year ahead. 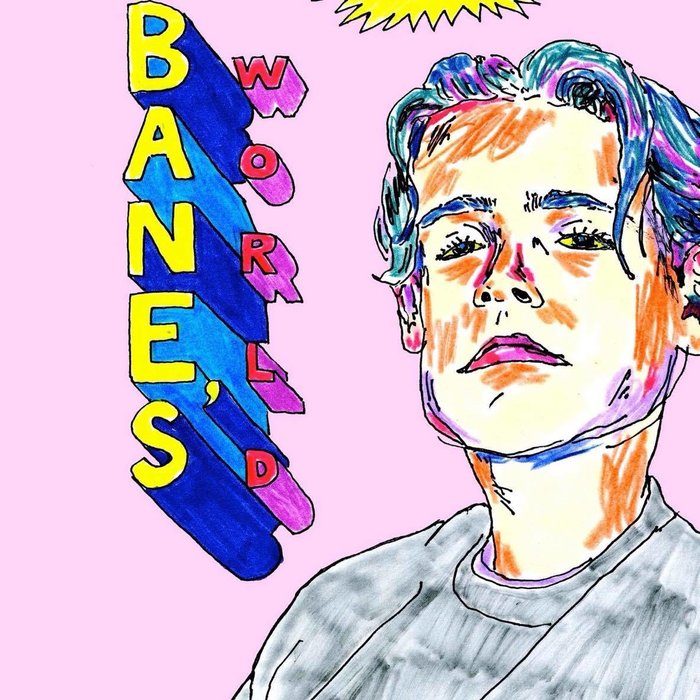 Who is Bane and what can you tell us about your world?

I’m Bane, or Shane, whatever you fancy. Bane was a nickname a friend gave me in high school, and it stuck. When I was thinking of pseudonyms and alias’ I didn’t want to try too hard to think of something that was ‘cool’ or ‘edgy’, and didn’t want to just self title everything, so Bane’s World was what I put my first demos up under, and I never changed it hehe

My world is lots of sleep, and lots of food. I really like to eat and spoil myself with good food hahaha. I also really love my dog.

Are your songs, in the words of a youtube subscriber, ‘songs to suffer too?’

-Well, a lot of my tunes are about love, finding it, or losing it, and either way, to me, that’s kind of a sad thing. I’ve never had the best of luck with those sorts of things, so yeah there is a lot of pain mixed into the songs, but with that being said I don’t want people to feel like they’re suffering while listening, or wallow in their own sadness to the music.

Do you feel your music is similar to Mac Demarco like the critics suggest?

– Not really haha, but not saying we don’t fall into the same musical niche, I’ve always really looked up to him, as a person in general and a musician, but don’t feel we have similar sounds at all. People love making that comparison, and they are of course allowed to, but I just don’t really see it, or hear it, for that matter.

What is the first thing you do when you wake up?

-Most of the time I’ll lay in bed for a while and try to work up enough courage to get up. I have insomnia so Im usually up until the wee hours of the night, then sleep most of the valuable day away. If I do by chance wake up early, I’ll make breakfast and fiddle on the guitar or piano, take my dog for a walk or go skating.

When are you at your most creative?

– Most of the time its after something bad happens in my life, or when I’m feeling overly emotional. Things have been going relatively smoothly as of late, so Im having a hard time making things that are full of sincere and/or genuine emotion

How would you describe your music?

– I want the listeners to be swept into almost a ‘Dreamland’, Or as a dear friend of mine, Max Gardener said, “Your songs are like a room you can walk into and stay a while.” Or at least I think thats what he said haha. Lots of textures, and layers. Also I feel like you cant stick the music into a box of one genre, I never know what to say when people ask what kind of music I make.

how did you get started?

– When I was 9 I made my dad buy me a guitar, and when I got home I didn’t know how to play it and I cried for hours. He eventually taught me but music was never a super serious way I spent my time. I was always caught up with skating or surfing and could never focus on one thing. It got serious for me when I was 18, and was playing guitar in Max Gardener’s band. He told me he was recording his music all on his own. I was incredibly inspired by that and ended up getting my own interface and began to dive into DAWs. Keyboard, bass, and drums came later, and I’m still learning everyday.

What was the inspiration behind ‘you say im in love?’

– All of the unfortunate events I’ve had with past loves I think. When i’m writing songs I totally zone out and kind of lose touch with where the emotion is coming from, and then the finished product is just there. Its kind of like an adrenaline rush making a song that I know is gonna be good, but at the end I can never remember the process I went through to get there.

-Part of me hates social media, and the constant hum of anxiousness it creates, but another part of me is unbelievably thankful for it. Without it, I wouldn’t be anywhere near where I am today, in terms of recognition as an artist. But I still have a long way to go and a lot to learn.

Who films your rad videos, esp ‘you say im in love’, which does not feel one bit rehash of VHS?

– I actually filmed and edited that video, with a little help from friends with set decor, etc.. but don’t claim to be a videographer by any means! Im glad that you think it’s cool, thank ya bubba. I read through the comments that video gets on YouTube and a lot of them are really quite weird and funny, so look if ya get the chance haha.

if you had one song left to play, which song would you choose?

– If it were my own song I’d probably play ‘The Place I’ll Be’.. I have a lot of fun playing that one live on acoustic.

What do you do on a weekly basis outside of the music?

– I stay home a lot, spend time with my pup, friends and family. Skateboarding has always been a way I spend my free time, Its a great way to blow off steam.

Could you list me any artists or musicians our readers should be buzzing off?

-I’ve been on a D’angelo kick lately, thanks to my buddy Max Lindberg, aka ‘Black Pool’. I know he’s old news but nonetheless still an amazing musician. Travis Bretzer is also an artist i’ve had on repeat lately. Drab Majesty is quite the character too, check him out.

Where in the world would you like to visit?

–I really want to go to Australia, or Thailand.

– I really want to travel a lot this year, step out of my comfort zone, and do things I can feel proud of. All in all this year would be great if I could just be happy