Sweaty Palms are an enthralling, bold and angst driven four-piece from Glasgow, glimmering with euphoric opaque couché colour. The band are a group designed to help people with cult obsessions. The key to their success will be their honesty, and cajoling of their listeners to possess purpose outside the prominent realms we are spoon fed.

A political band at the core and in their very nature without appearing scripted or manufactured, or even reeking of Sixities nostalgia.

They are the ‘heroic’, ‘ugly’ and ‘gutter’ of a disenfranchised society and hell bent on awakening us all whilst recovering the ‘alternative beauty’ of Scotland ‘we’ fans around the globe have been missing, since the distasteful and derivative ‘The View’ and, ‘Biffy Clyro’ first spawned their songs, upon the musical landscapes!

‘It depends what kind of band you’re in. We’re in it for the love of making music.’

The songs are anthems for their generation’s anxious, compassionate and disillusioned, regardless of age, race and gender. It is an altogether, alternative reaction to the lost ‘smart phone’, and ‘instant media’ generation that is failing to define them, or us.

‘The apparent increase in mental health issues is probably partly due to people being more willing to talk about it, but there is still a long way to go in dealing with it. ‘

‘The skinny’ exemplifies the autonomy and manufactured seizure of society by the authorities, big business and celebrity; we are policed by robotic politicians and artists molded by ‘fame’ feeding us artistic drivel. ‘Captain of the rugby team’ laments the lad culture still lingering in society. These songs are war cries, yet through virtue of creativity, such negative energy becomes positivity and voice.

‘The Empire is still in full swing. Queen Lizzie has her bony old fingers in more pies than she can count.’

Although, I disagree with the band, as a fan of the union between England and Scotland independent; what gain is there at this stage? I mean even David Bowie was a fan of the union. Yet, I truly admire how the band are very much in control over their own destiny, brave political revelry, as well as, how they deal with the tremendously negative aspects of society in a manner full of positivity and humour. 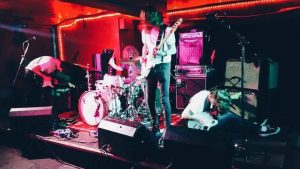 It has been one of my most cathartic interview to date and I am very much proud to share our conversation. I hope that readers can not only relate but also push forward the messages embedded in the interview, via the words, songs and actions of the Sweaty Palms.

–We met at a support meeting for ex-cult members and decided that with all the experience we had we could probably have a go at starting our own.

We were originally called The Sweats – we had a bit of fun switching names every now and eventually Sweaty Palms seemed to stick. It was originally a song title for one of my first attempts at writing a ‘song’, I can’t remember how it goes..

We feel this particular quote has been a little over emphasised. Our ‘drug fuelled anxiety’ is usually met through general angst and insecurities. The world is in strange shape. There’s lots to shout about. We’re inspired by connection and paradoxically perhaps – escapism. We seek to escape our personal prisons in music while connecting with others through it.

-Trump is cartoon villain who might manage to rock the boat a bit but probably won’t tip it over. It looks as though his election has given the west a fright and caused people to swing back towards the left slightly (see Jeremy Corbyn, Emmanuel Macron). With any luck this trend will continue but failing that we are always ready to look out our balaclavas and pitchforks.

IDK! Or are certain groups within the old power feeling rejected? People say the PC world has gone mad. I don’t necessarily agree, it’s a lot easier for people to voice their opinions over a computer as the repercussions aren’t quite as confrontational, which can have good and bad points. Online debates can seem never ending and usually (from my experience) don’t ever seem to help change anyone’s mind on anything. It’s more one group trying to get one over on another than actually reaching any kind of middle ground, which is what a debate should be. Instead it’s like a competition. There is definitely a new breed of busy-body’s who are just waiting for an excuse to argue. However, it’s nice that people feel more comfortable to voice their opinions openly. It’s interesting seeing people you’ve known for years posting something political that they’ve never had the courage to voice in person. 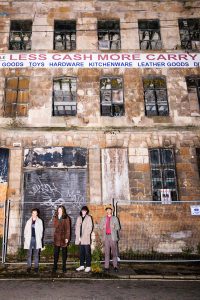 -That moment right after you orgasm when you have the sudden realisation that you’re nothing more than a meat bag full of organs with inescapable instincts to procreate and nothing really matters anyway because we’re all going to die.

-From a distance and while wearing protection.

-I wish they would hurry up and roll out a fleet of self-driving Megabus’ so that all those drivers can get back to their sad lives of racism and auto-erotic asphyxiation.

Amazing, working with Emily and Stu created a safe haven for us to make mistakes and develop beyond what we thought we were capable of. Robbie once delivered a plant to Emily (not a euphemism, an actual plant) and Emily him about their free education recording time. We made an EP with them and never looked back.

It’s just observation. Anyone with any kind of intelligence must be a feminist as far as I’m concerned. It’s just equality after all. It’s pretty baffling the way some of our generation can still be so objectifying towards women. The ‘alpha male’ statement was really just a dig at the ‘fuck boy’ antagonists (LAD) in white shirts that go to expensive clubs and take pictures of each other posing with vodka bottles. They’re the real oppressors, and they don’t even realise they’re doing it half the time. Too dumb to live.

The sex change was approved. I am officially a man. Be who you want to be.

I feel it’s from living in a conservative republican western world where there is an overall lack of empathy from most people, particularly the more privileged among us. Understanding that the circumstances that we’re born into lead us to where we are today, consciously or unconsciously. Stuart Lee articulated this far better than me in ‘the money is mine’ Society doesn’t want to carry on the privileges that are bestowed on them to others.

-It’s good for what ails ya.

Glasgow’s a multicultural city, you can people from anywhere just on a standard day. It’s a great place to live (as much as we curse it). Everyone gets sick of their hometown. People seem to be coming together at the moment, there is definitely a stronger collective growing. There’s been a great outburst of good music recently which everyone’s been hungry for. There was a period of really mundane music and posturing going on for a while so it’s a nice change, let’s hope it lasts. 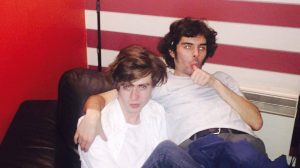 -The internet has the potential to be the greatest tool social democracy has ever wielded, but at the moment it’s controlled by the establishment, and their grip is tightening. We unconsciously seal ourselves off into echo chambers of ideas that we’re comfortable with when we use social media, and this in turn divides us neatly into target audiences for big business. Unfortunately, it looks like things are only getting worse. On the other hand memes now hold sway with international politics, so there’s that. On a serious note, there is a worrying epidemic of anxiety and depression amongst young people today that social media has undoubtedly played a part in. We are the first generation to grow up with an ever-shifting measuring stick of ‘success’ being held over our heads. The apparent increase in mental health issues is probably partly due to people being more willing to talk about it, but there is still a long way to go in dealing with it.

-We are a long way down the slippery slope into unconscious conformity. There’s no turning back. The iron heel is descending and soon the corporate oligarchy will own everything from your browsing history to your fallopian tubes. There’s no denying that things are bad and getting worse on a global scale. I don’t know how most people square all this up in their own heads, but it seems for us the way to deal with it is to address it in the music.

Without sounding arrogant – a large percentage of the population like shit music, they don’t want to be challenged. The internet has put an end to counter culture so there’s no real movements anymore. I think the closest we’ve came to it recently is the rise of Sleaford Mods. Mainstream music is always going to be crass, which is fine with me – the minority will remain integral. It’s just a pity that the real artists are struggling to eat, while there’s these fame hungry individuals (with no interest in music whatsoever) – who are happy to sing other people’s songs and watch the cheques fly in. 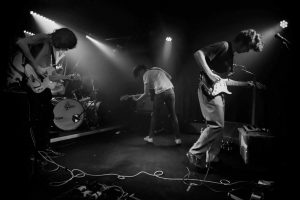 Not necessarily. It depends what kind of band you’re in. We’re in it for the love of making music. However, it can be an expensive hobby and if you’re looking to get your music made tangible/distributed then perhaps that’s where a label can come in. Everything else is at your fingertips really, you just need to educate yourself. We work pretty well within the band, taking an equal weight on replying to emails/organising shows. A lot of bands feel the need to have a manager when it’s just unnecessary. But again, it depends on what kind of band you’re in.

-There is no set method that we work to. Mostly we spend many fruitless hours in the rehearsal room jamming until something shines through.

-English fish and chip shops usually sell Scottish fish and chips made from Welsh potatoes. The empire is still in full swing. Queen Lizzie has her bony old fingers in more pies than she can count.

Norman the Illusionist is an infamous magician who lures around kelvin grove park. He’s homeless, his tricks are great – he’ll do a few card tricks etc and people will share out whatever shrapnel they can. He’s a great laugh. We’ll say no more on the concepts – the spectators can make their own interpretations.

That’s up to them really. We want to take our time to make an album because we see it as an art piece – «nae need tae rush a thing – unless there’s a rhino up yer arse» -Robert Anderson. We’ve thought thoroughly about the placements of each song and there’s songs we’ve had to drop that have been on the list for years.

– It’s completely empty, may we have another?